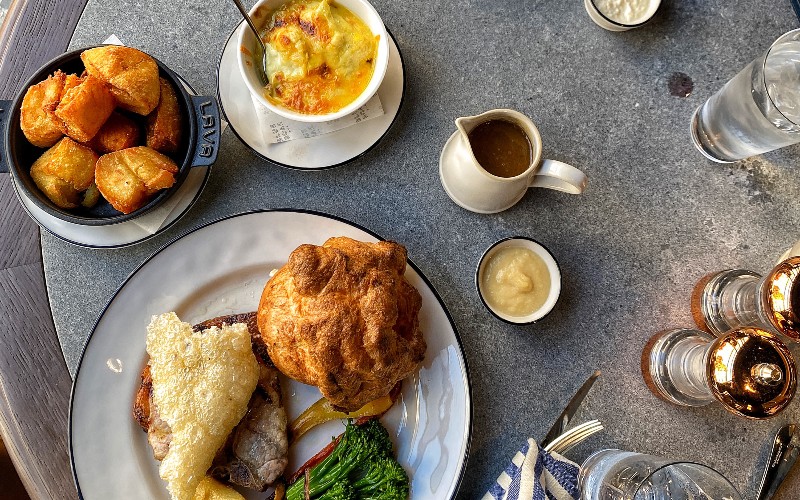 Previously Head Chef at Michelin-starred pub The Harwood Arms, Sally Abé has recently found a new home overseeing the restaurants at the Conrad London St James hotel. With plans for a fine dining restaurant with an all-female team in the pipeline – Sally’s know for championing female talent in the hospitality industry – she’s first turned her attention to the Blue Boar Pub, the more casual offering in the hotel with a menu focused around pub classics with a twist.

Given The Harwood Arms is known to serve one of the best Sunday roasts in London, it’ll come as no surprise that the roast we tried when we went down for the first Sunday of Sally’s service was a belter. The pub offers a very attractive menu, the kind of menu you over-order from and regret it when the huge roasts appear – so tread carefully because you won’t want to miss the puds either. We started with the potted Cornish crab topped with a delicate cucumber jelly, served with two slabs of sourdough toast and the incredible corned beef and mustard croquettes with slaw and pickles – both ‘must orders’.

Roasts come with all the trimmings including a bowl of roasties, Yorkshire puds, veg and jugs of the best gravy we’ve had in any pub or restaurant – thick and tasty. Don’t miss the super creamy, cheesy cauliflower cheese side either; it’s intense but it’s well worth an order. If you can fit in a dessert each, you’re one better than us. We just about managed to share a sticky toffee pudding with ice cream before rolling out the door to St James Park for a well-earned snooze in the sun. The Blue Boar might not be the most atmospheric or characterful pub (being inside a 5-star hotel) but the food and attentive service is worth the trip alone.