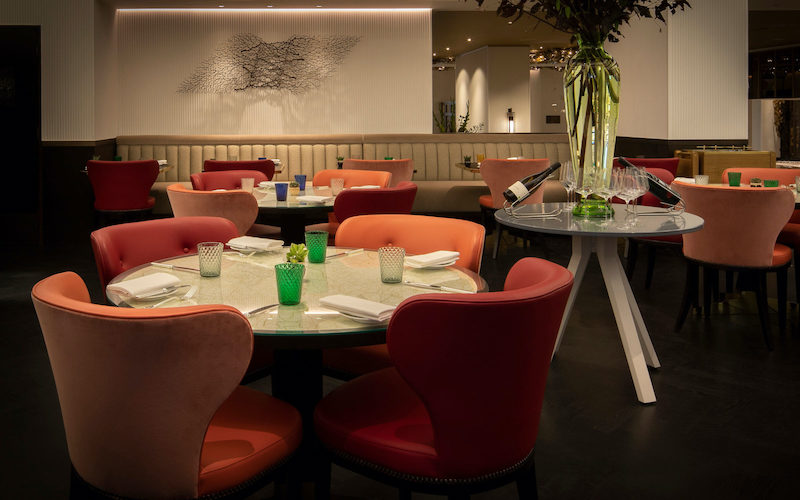 Most restaurants have some tables that might be slightly better than others but mostly it doesn’t affect the experience too much wherever you sit. Jason Atherton’s new restaurant The Betterment, which is part of The Biltmore hotel in Mayfair, has already caused a lot of discussion about where to sit however, with every reviewer wishing they’d been sat somewhere else.

The problem is, The Betterment is divided up into lots of different sections, with a front room by the open kitchen, a smaller raised room at the back and then a covered outdoor terrace. For what it’s worth we were sat in the back room and actually preferred the look of the front room, which had a view of the kitchen – no one else seems to have been a fan of this though! We’d advise getting there before your booking time and asking to have a look around, then choose where you want to be.

Seating advice out the way, what about the food? Well as you’d expect from the Jason Atherton stable, the food is dependably very good. We would definitely say not to order too much though as The Betterment flies in the face of any small plate conventions, offering big hearty portions of classic dishes instead. We began with an excellent starter that was innocently described as crab on toast – what actually arrived was a huge crab shell filled with rich crab meat, swimming in a bisque-like sauce, and a slab of brioche with crab and lemon butter. It was amazing but probably would have sufficed as a main course at that size and richness.

The highlight of the starters was probably the roast scallop however, coated in a parmesan cream and served with girolles mushrooms. It was still very rich but a much smaller size so probably a better tactical choice if you’re going for a full three courses. Next up was a beautiful cut of Highland venison, together with trompettes mushrooms, quince, and red cabbage – a perfect autumnal dish. The line caught sea bass with oysters and cucumber was well cooked, with a nice crisp skin but perhaps wasn’t quite on a par with the standard of the other dishes.

We just about managed to fit in dessert and we’d recommend you do your best to at least try the bitter chocolate tart which is pretty exceptional. We were absolutely gutted not be able to tackle the Victoria sponge with strawberry and vanilla ice cream and yoghurt sorbet however – next time.