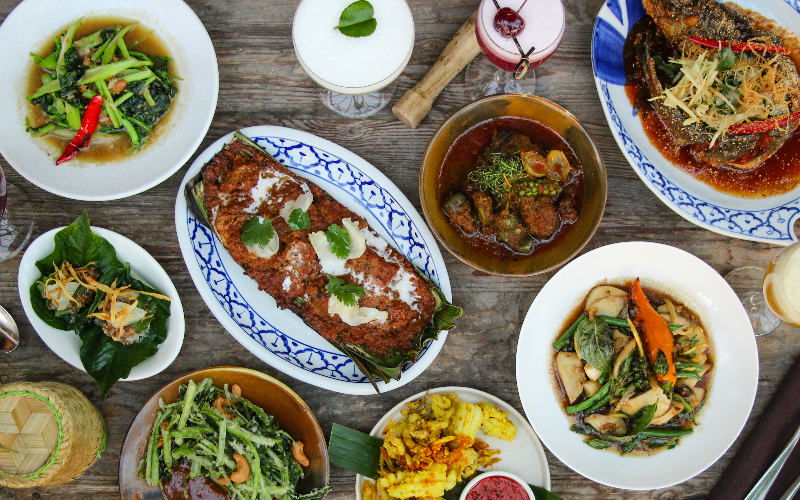 Not only is The Begging Bowl a bit of a Peckham institution, it’s also one of the best Thai restaurants in town – Andy Oliver even worked here before opening Som Saa. Originally opened back in 2012, the place has recently had a bit of a makeover, with a refurb of the main restaurant and the addition of a brand new cocktail bar with new snacks menu, part-funded by a successful Kickstarter campaign launched by co-founder and Executive Chef Jane Alty.

Named after the alms pots or begging bowls that Buddhist monks carry, The Begging Bowl is big on sharing and big on community. It’s a cute spot to be in, especially the conservatory part of the restaurant, the staff are super friendly and it definitely has a lot of local love, not to mention the food is bloody good too.

It may be a neighbourhood joint but don’t come here expecting pad thai and green curry – the menu draws inspo from all over Thailand with a little bit of east-meets-west thrown in too. We kicked off our dinner with an explosive little mouthful of smoked mackerel, pomelo, galangal and peanuts in betel leaf, which really set the tone for the rest of the meal. The deep fried whole seabass with green mango was another hit, with crispy skin, soft flesh and and a sweet, sticky and very addictive tamarind and chilli caramel dressing. We also loved the turmeric, black pepper and braised pig cheek curry – the pork was super tender and the rich, slightly sour sauce was perfect for mopping up with sticky rice.

We also had two great vegan dishes; a stir-fry of meaty king oyster mushroom, yam bean and wing bean, and charcoal grilled celeriac with peanut curry and pickled ginger. We’ve never had celeriac this way before – basically drenched in a satay-style sauce – and it was one of the standouts of the evening. We went plant-based again for pudding, banana fritters with tamarind, peanut brittle and turmeric custard, which managed to be sweet without veering into sickly, something that can so often happen with bananas.

Whether you’re a carnivore or not, you’ll have no trouble eating very well at The Begging Bowl, and if you’re a fan of Thai food, it’s worth travelling down to Peckham for.