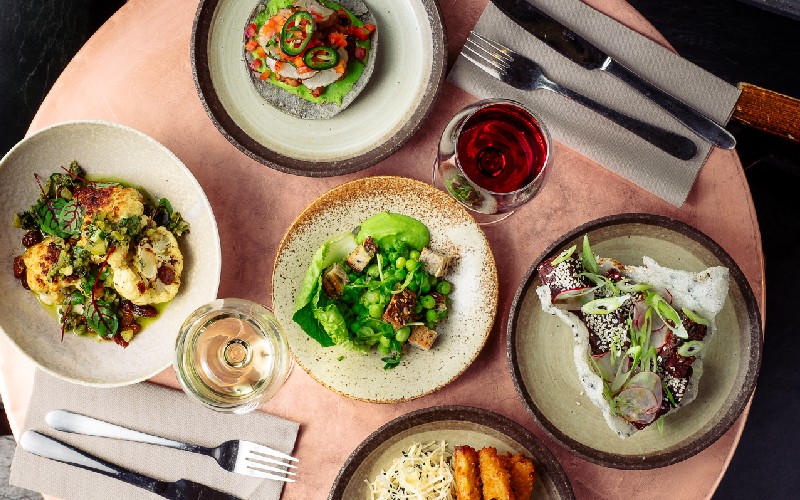 The Sun & 13 Cantons is like the X Factor for pop-ups. Get in there, prove your worth and you might end up a BIG star – Asma Khan’s Darjeeling Express, Mandy Lim’s Sambal Shiok and Budgie Montoya’s Sarap all started there and have all gone on to permanent restaurants. Now it’s the turn of Rishim Sachdeva, a Chiltern Firehouse and The Dairy alum, who is focusing on a mostly plant-based menu not specific to a cuisine or nation. Tendril is the name and eating veg is the game.

This isn’t their first rodeo though, Tendril’s been popping up since autumn 2019 (and was actually due to open at the pub last autumn before being postponed due to the pandemic) but this is their biggest space yet. There are two menus on offer, a la carte and discovery, which comes in mostly vegan and vegan formats – basically one has a cheese dish on and the other doesn’t. The latter is the best way to go, mainly because someone does all the choosing for you, and you get two snacks, three small plates, a main and a pudding.

We went for the totally vegan discovery menu and for us the highlights were the heirloom tomatoes with fava bean miso & pickled ginger; the moreish chargilled cauliflower with smoked maple, kimchi & raisins; the deep fried celeriac terrine with celeriac puree & celeriac remoulade, which really showcased how versatile a vegetable it is; and the chipotle mushrooms with BBQ leek, peanut glaze & courgette, which had a real savouriness and meatiness thanks to the complex spicing on the mushrooms.

Despite not sticking to one style of food, the menu at Tendril still feels cohesive, and thanks to the clever use of spicing and texture on each plate, you really don’t miss the animal products. Definitely one for all you plant-based peeps to check out before the residency ends.