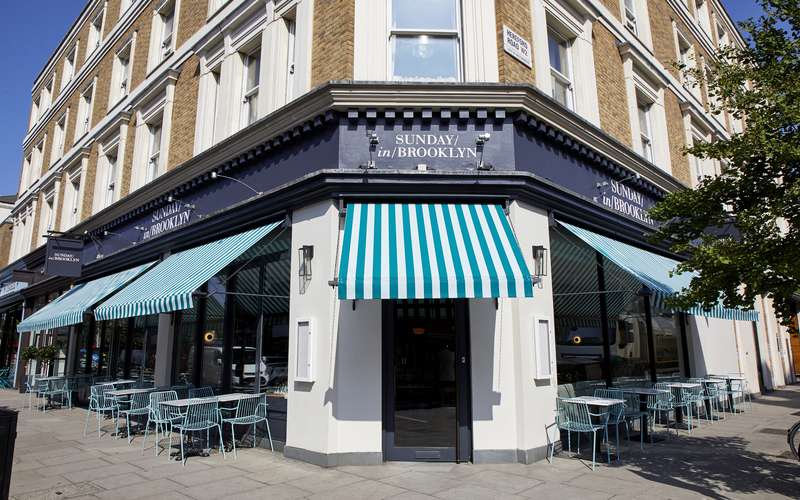 Sunday in Brooklyn, a cult fixture in New York’s dining scene and one of our favourite spots in the city has hopped across the pond and opened a big spot in Notting Hill. The Williamsburg fave, opened by founders Todd Enany, Adam Landsman, and chef Jaime Young in 2016, is known for its inventive spin on American staples, playful cocktails, an epic brunch menu (including super ‘grammable pancakes, which come slathered in hazelnut maple praline and brown butter), and great atmosphere.

The brunch menu gets a lot of attention in NYC although it’s not up and running over here just yet. We used to love going for dinner and cocktails at the Williamsburg restaurant anyway and happily it’s just as good in London as it is in New York. The American approach to both portion sizes (generous) and service (super friendly) have been imported as well as several of their signature dishes, along with some brand new ones created just for London.

We kicked off with Ofira’s pitta and hummus, a giant round of hot, fluffy bread topped with a beet kebab and served alongside a bowl of hummus slicked with oil, pistachio tahini and sumac yoghurt; the crab & artichoke dip (with more bread) which is basically a molten pot of joy and worth the journey to Notting Hill alone; and the summer cucumber salad with peaches & kefir for some refreshment amid all that richness.

For mains, we went for the grilled swordfish with charred broccoli, cherry tomatoes & butter beans, a great late summer dish being both fresh and filling, and one of Sunday in Brooklyn’s famous burgers, the crispy chicken sandwich. It’s a very accurately named dish; a ruggedly crispy piece of thigh doused in sweet & hot honey and packed into a potato bun with cabbage & pickles, served with a mound of fries just to up the carb count a bit further. There are a lot of good chicken burgers in London and this one is up there too.

Sadly the soft serve machine decided to malfunction on our visit, so desserts were off the menu, and we had to make do with some of Sunday in Brooklyn’s signature (and very good) cocktails such as the ‘Honeybear on Holiday’, made with rum, sherry, apricot, pineapple, lime, cumin & honey.

Being big fans of the Williamsburg original, we were massively excited for this one and it delivered. Now bring on that brunch.