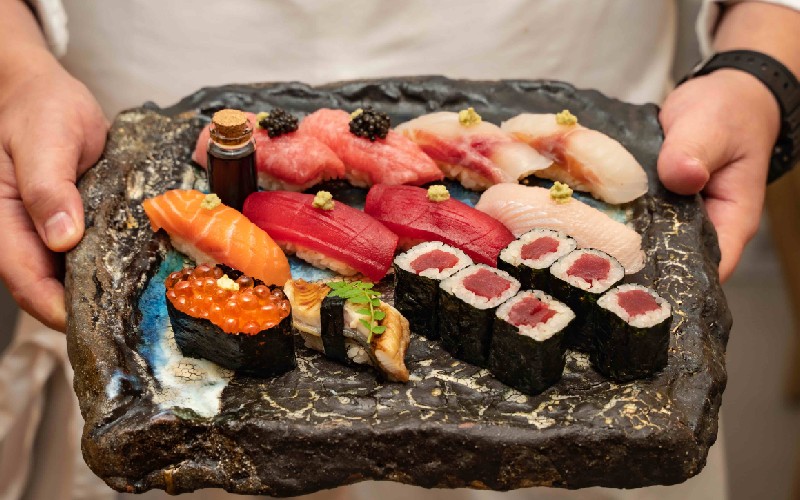 Sushi is one of those meals where you get what you pay for. Sure you can get an ice cold box in the supermarket for under a tenner but a purist would probably tell you that wasn’t even sushi.  Of course, heading to a place like Sumi, which recently opened in Notting Hill, and dropping £50 on lunch isn’t something most people can do every day. But if you like your sushi and don’t mind paying for the good stuff, then Sumi is well worth checking out, as we discovered recently.

Not to go on about price but in the sushi stakes, £50 isn’t even so bad – Sumi is in fact, the ‘casual’ sibling to Michelin-starred Endo at The Rotunda, where the 20-course omakase menu will set you back £195 per head. At Sumi, which has taken on the old Andina site on Westbourne Grove, Endo Kazutoshi has created a slightly more ‘everyday’ menu – a tight selection of nigiri, sashimi, and temaki sushi, as well as a few snacks and larger dishes such as wagyu steak.

If you want to keep it slightly respectable however, take our tip and ignore the larger plates all together and concentrate on the excellent snacks and sushi. We started with a lovely miso mushroom soup, a tangy sesame seaweed salad and two mini bites of a ‘kushi-katsu’ sandwich. We would very much like to see them make this a full size sandwich for takeaway – one bite really wasn’t enough it was so good.

Moving on to sushi, and the skill on display is very apparent – if you’re sat facing the counter you can watch the chefs craft each piece by hand. We went for the otoro (fatty tuna) which is our absolute favourite, as well as hamachi, and good old salmon – it’s worth asking for the salmon to be served ‘aburi’, meaning it is lightly cooked with a blowtorch before serving, giving it a slightly smoky flavour. Temaki are well worth including in your order too – diced fish and rice are served wrapped in dried seaweed, so you just pick them up and eat them with your hands, sort of like a taco. Again, the fatty tuna is a winner here.

As we think we mentioned, Sumi is not cheap, but you won’t regret coming here if you want to eat some of the best sushi in London.