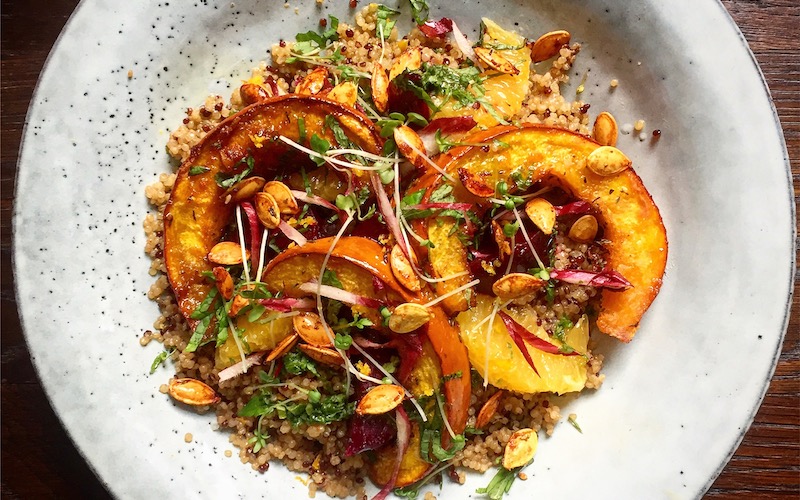 We were sad when it was announced that Rok was closing both its sites, but the good news is that Slaw has arrived to save the day, with a residency of at least a few months at the old Rok Upper Street location. Now Slaw’s food may be pretty different to Rok’s but, having been down to check it out, we can say we’re big fans of what founders Tony and Anthony are doing here.

A plant-based ‘root-to-stem’ restaurant may not sound much fun but they’ve worked really hard to create dishes that appeal to everyone, meat eaters included. The dishes are bright, bold, and pack a lot of flavour so you can forget all about those meat cravings with no trouble.

The menu is pretty short with just four small plates, two large plates, and two desserts – if you’re feeling particularly hungry you can eat near enough the whole menu between two (we did). The menu will change a bit depending on what produce the guys have got in but we definitely recommend the roasted and pickled carrots with hummus, a carrot top pesto and a hazelnut and rye crumb. The other small plate you won’t want to miss is the spiced cauliflower and red onion with coriander and mint dressing.

The two large plates were probably our favourite of all the savoury dishes. The bright purple beetroot dahl was especially good, served with a fresh cucumber raita, but the butternut squash and kale curry with black rice and roasted squash seeds was also a winner. The best was certainly saved for last though – the sea salt chocolate mousse with almond biscuits and a caramel sauce might just be the best dessert we’ve had so far this year.

We’re big fans of Slaw both in its sustainable approach and the inventive food coming out of the kitchen. We suggest adding this to your hit list.