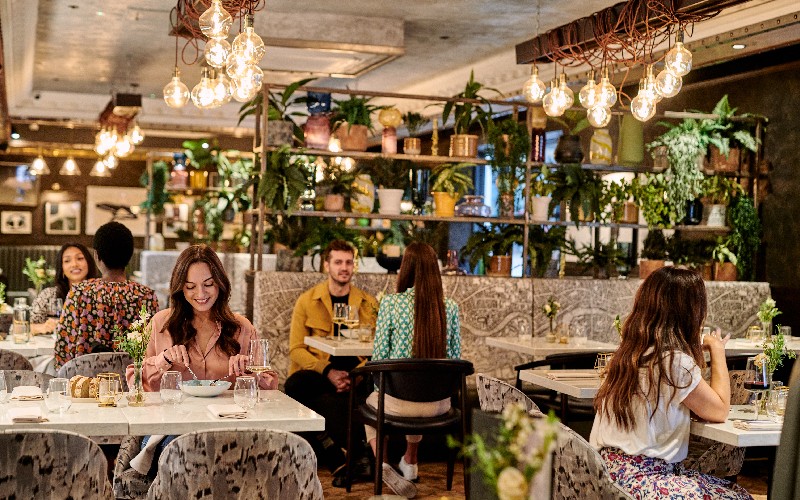 After opening his first London branch of Six by Nico in Fitzrovia in 2020, Nico Simeone didn’t waste any time getting onto his second (the eighth for the group overall) in Canary Wharf. At 100 covers plus a 30-seat terrace and a dedicated bar area it’s bigger than the Charlotte Street restaurant, and is well as being a good-looking spot, it’s good-smelling too – the group has its own fragrance don’t ya know.

The concept for Six By Nico is a themed six-course tasting menu that changes every six weeks (when we went to the Fitzrovia restaurant it was Chippie) and we went to the first night of the New York menu, which’ll be in place until mid-December. The price is the same regardless of the theme, coming in at a very reasonable £37 for six courses, with wine pairing for £33, and an extra course of snacks available for a fiver. We’d recommend adding on one portion of snacks to share between two, especially as one of them is an excellent prawn & sausage corn dog (think prawn & pork dumpling vibes) topped with a sweet red pepper ketchup.

The first proper course is Beef Burger Doughnuts, which suffers in comparison to the corn dog as the ratios are off – there’s lots of dough and not enough beef to get that real burger taste. Happily the menu hits its stride with the next four courses, which pack a real punch of flavour whilst looking pretty and delicate. There’s Eggs Benedict, which is more ham than eggs, with a crispy ham hock terrine dressed with celeriac remoulade, brown butter hollandaise and half a quail’s egg; Little Italy, aka saffron pici pasta with hazelnut ragu and pecorino foam; Clam & Cod Chowder, which isn’t a soup at all but a potato terrine topped with roasted cod and clams, barbecued leek, roasted corn, lemon gel and a rich chowder sauce; and Flatiron Building, slices of flat iron steak and a brisket croquette with Jerusalem artichoke.

The final dish, the Big Apple (has to be really doesn’t it?), which is a New York cheesecake with apple compote and pecan & oat granola, looks amazing – the cheesecake with compote in the middle has been shaped into a shiny red apple that’s almost too pretty to eat – but is slightly style over substance as the texture of the red coating is a bit plasticky.

Minor issues on the starter and pud aside, the New York menu at Six By Nico really is a fun time; the dishes are inventive and playful, you’re surprised when the plates get put down in front of you, and it’s great value for money. And with the theme changing every six weeks, you’ve always got a reason to come back.