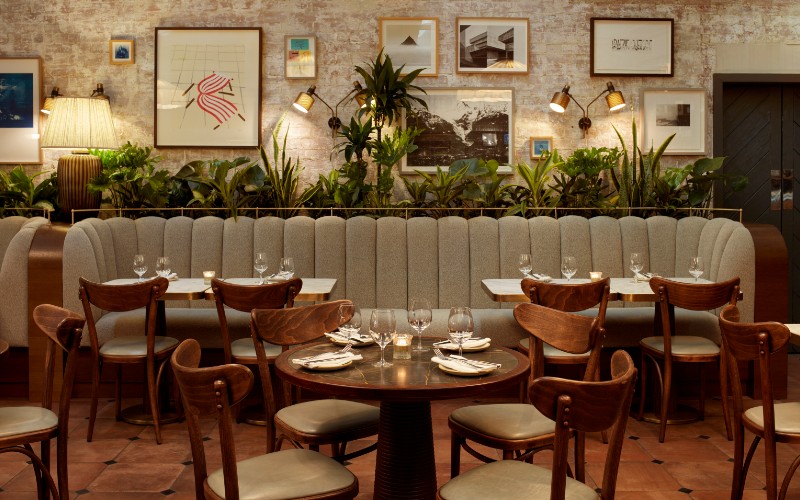 The ground floor of The Hoxton, Holborn has had a bit of a revamp with modern bistro Rondo moving into the restaurant space. It’s been created in collaboration with co-owner of Quality Chop House, Portland and Clipstone William Lander, with ex-St John and EartH Kitchen chef Chris Gillard heading up the kitchen. Chris has carried a similar style of cooking here, with a menu of seasonal, pared back British dishes – it’s the kind of food that reads as simple but takes a lot of skill to pull off properly.

Any and all meals at Rondo should begin with the cheese straws (we showed excellent restraint keeping it at just the one order) but for proper starters we had two salads, both of which came in substantial portions; the earthy roast cauliflower with chicory and sunflower and the Cornish crab with cucumber and saur-fennel, which was lovely and fresh.

Next up was the venison haunch with red cabbage and swede mash, which had exactly the balance of sweet, sour and savoury that you would want, and the roast Sutton Hoo chicken with creamed corn and Jerusalem artichoke – if you think chicken is a boring dish to order in a restaurant, this one will change your mind.

One dessert between two was all we had room for after that. We tried to keep it light with the peaches, raspberries and mango sorbet but as that had run out we were practically forced to go for the chocolate mousse cake with pistachio ice cream. It was a proper wedge of cake, not the delicate and airy slice we were expecting but it was moriesh nonetheless.

Rondo is as much about the wine as it is the food, as evidenced by an impressive wine wall at the back of the space. Will has championed creative winemakers on the list and it’s really easy to navigate thanks to his categorisations of Summer Juice (light wines for drinking in the sun), Continental Wine Bar (some of Will’s faves from Europe) and Food-Friendly (to match the punchy flavours of the food). We had a Dado E Tratto Rosso from the Summer Juice, which was described as ‘food-friendly but not too heavy’ and it was spot on. There’s also some special bottles on the Reserve List if you’re looking to push the boat out.

With Seabird in Southwark and now Rondo in Holborn, The Hoxton is really taking their in-house restaurants up a notch, and now with their early bird deals at both, you can stuff yourselves at dinner and stay the night for free.