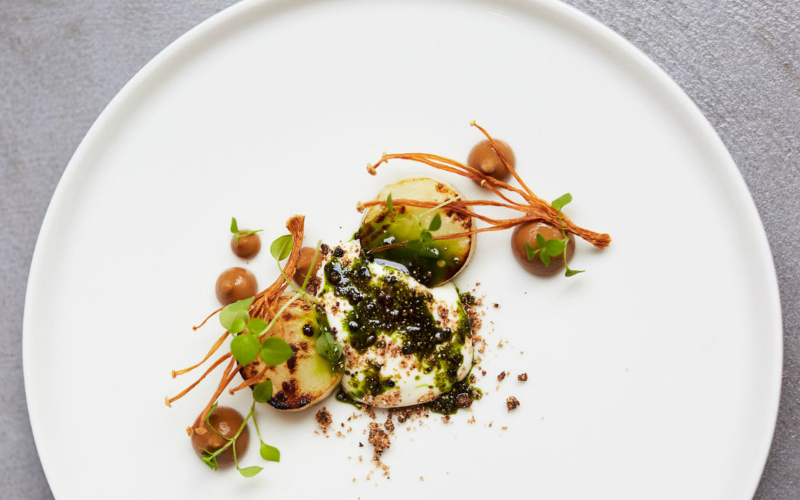 Simon Rogan, the chef behind two Michelin-starred L’Enclume in the Lake District, is back in London with Roganic – and this time he’s here to stay. He previously ran Roganic as a two year ‘pop-up’ from 2011-2013, and has since launched Fera at Claridge’s (he’s no longer involved), and he also runs Aulis in Soho, a chef’s table and development kitchen with an eye-watering price tag.

Roganic has taken over the site on Blandford Street in Marylebone that was L’Autre Pied, fittingly just a couple of doors down from where the original pop-up was. Inside it’s that kind of relaxed fine-dining feel – there’s tablecloths but it’s not overly stuffy – that Londoners have become quite accustomed to now, and it’s certainly a more fun, intimate setting than the huge, slightly dull space that he had to deal with at Claridge’s.

Food-wise, Roganic has a very similar outlook and set up to L’Enclume so it’s a great chance for Londoners to check out Simon Rogan’s food, and everyone should because it’s definitely one of the best restaurants in London at the moment. There are different levels you can go in at, but essentially it’s a no-choice, multi-course succession of dishes, largely centred around vegetables and fish – it’s clever, it’s intricate, and yes there are often flowers tweezered with precision on to the plates, but boy does everything taste good. Each dish is genuinely a beautiful creation to look at too.

With over fifteen courses, we won’t bore you with listing everything (and dishes change daily anyway) but there were still some stand out highlights in what was a pretty faultless lunch. Early favourites were a salty bowl of seaweed custard with caviar (better than that sounds we promise!), plus a fresh asparagus spear served with a bone marrow hollandaise. A dish of minted peas was a beautiful taste of spring, given extra richness by small cubes of ox tongue, and scallops were served with wafer thin slices of crisp cauliflower and black garlic. The only proper meaty dish was 21-day-aged Cumbrian pork and it was certainly worth waiting for – two slices of loin covered in translucent lardo, served with a sweet carrot puree, fresh carrot and white broccoli. Our pick of the desserts had to be the Yorkshire rhubarb hiding beneath ice cold buttermilk ‘snow’, although the mini doughnuts weren’t half bad either.

Simon Rogan is a fantastic chef and Roganic is fantastic restaurant – it’s one to save up for but it’s definitely worth every penny in our book.

For our favourite London restaurants, see our Top 20 guide here.

Get Me There
April 27, 2018 by christina
eat + drink, food review, LOTI eats, marylebone

THESE BOOZY PRINTS ARE RAISING FUNDS FOR THE… (1)