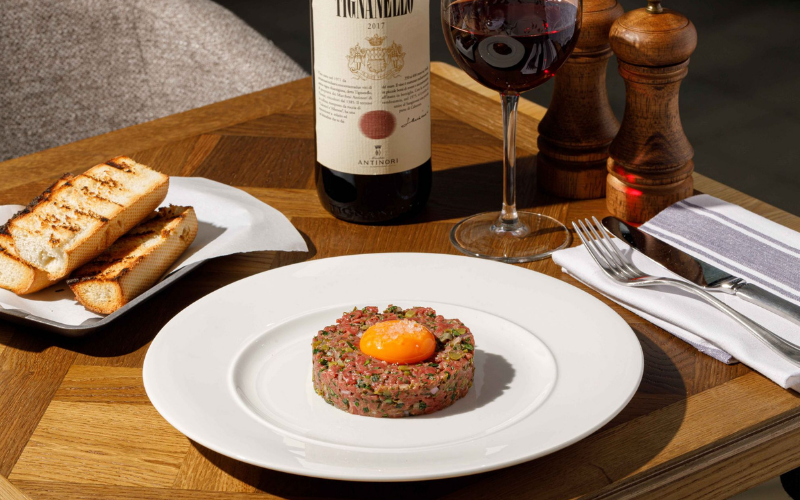 The City has got a brand new brasserie as Andrew Fishwick, Tristram Hillier and Romain Pottier have teamed up to open Revolve. It’s positioned up on the second level of Broadgate Circle so it’s away from the main hub, which was absolutely heaving on our visit – the City is officially back in full force – so it’s a little quieter and less rowdy. Revolve is modelled after the brasseries of New York and Paris, but it’s sleeker and more City-fied than somewhere like Zedel.

The menu is largely French-influenced but makes use of British produce and is packed with solid versions of classic dishes. The steak tartare was packed with capers and topped with a perfect orange yolk, and served with mini sourdough toasts for scooping and a bottle of Tabasco for us to add more heat, which was a nice touch, and the heirloom tomato salad with black olive tapenade was a great summery starter.

We can never pass up a pie, summer or not, so for mains it had to be the South Coast fish pie. It was super creamy thanks to the creme fraiche and Noilly Prat veloute in the mix, and had a soft boiled egg in there as a surprise but the overriding flavour was of lemon so it was difficult to distinguish which fish was in there. The side of petit pois a la francaise lived up to its billing though, packed with baby gem lettuce and smoked bacon lardons.

Our other main of bavette delivered everything you would want – a good-sized steak, cooked as ordered, a tasty black pepper sauce and some Koffman fries on the side, and at a decent price for the area too. The portion sizes were generous on the desserts too – the Eton Mess was a huge glass of whipped cream, meringue, strawberries and coulis, which was a little too large given the overall sweetness but we gave it a good go.

Revolve isn’t reinventing the wheel but with a menu that covers all bases and attentive service, it’s a good bolthole to have up your sleeve. And there’s still the guest chef programme to launch, which’ll see chefs like Lee Westcott, John Javier, Josh Eggleton, Anna Hansen and Gareth Ward bring new dishes to the menu each month as well as creating one-off dining experiences, so those will be worth looking out for.