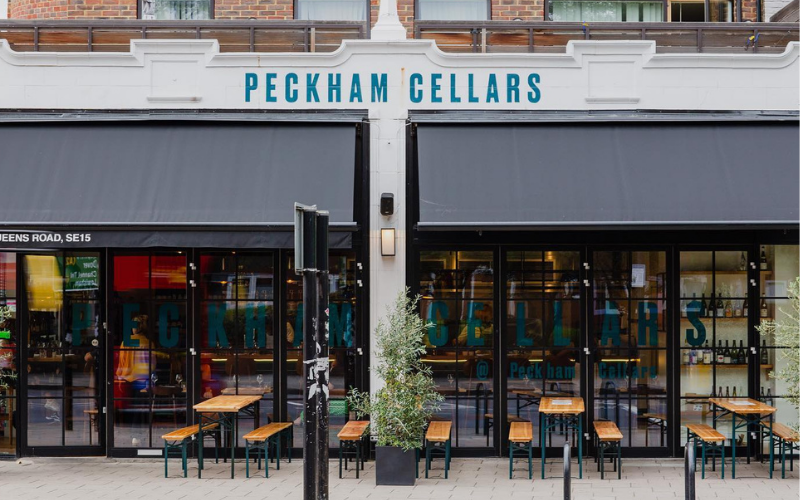 Peckham Cellars, the wine bar, bottle shop and restaurant in, er, Peckham, run by Helen Hall (who’s worked at Rovi), Luke West-Whylie (ex-Marcella and Jones Family Kitchen) and Ben McVeigh (formerly head sommelier at 28-50 Fetter Lane), with ex-Crispin chef Henry Freestone heading up the kitchen, has only been open since late 2019 but it’s already made quite the mark, winning a Michelin Bib Gourmand in the 2021 awards. It’s very popular with locals too; it’s not a huge space but was packed out on our midweek visit.

As you’d expect from a wine bar, Peckham Cellars is well stocked with over 150 bottles available. There’s a particular focus on small scale producers and their selection gets updated all the time, and if there’s something you really enjoy drinking in there are plenty of wines available to buy from the Peckham Cellars bottle shop should you want to continue the party at home. Though there are lots of goodies on the list it’s well worth asking the team for recs as they often have some bottles open that aren’t on the menu – we requested a warming but light red and were given Herència Altés Cupatge, an organic red from Catalonia that really hit the spot.

The food menu changes seasonally but always sticks to that simple style of cookery that lets the produce shine and is all about flavour rather than unnecessary bells and whistles. Winter tomatoes, dressed only with olive oil and salt, were bursting with flavour; butter beans cooked in white wine came flecked with spinach and blanketed with parmesan, and needed nothing else. The clever use of textures also keeps the dishes interesting and well balanced, even with just two or three components on the plate. Creamy burrata oozed over pickled pears and walnuts; crisp roast purple sprouting broccoli and breadcrumbs was paired with smooth whipped gorgonzola; and sweet roasted delica pumpkin was offest with a bitter leaf salad and hazelnuts.

We stuck to the veggie plates, partly on purpose and partly because they just sounded so good, but if you do want something meaty and more indulgent, check out Henry’s beast of a Christmas sandwich. With plenty of great wines and effortless food, Peckham Cellars is the kind of place you want in your ‘hood.