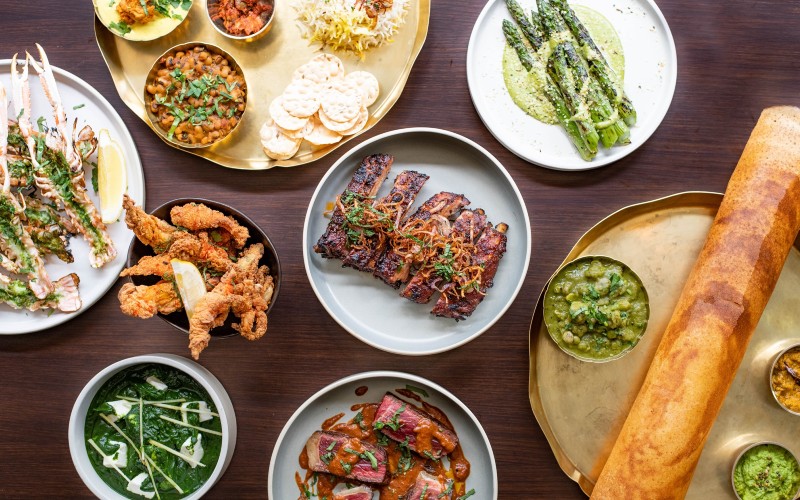 Pali Hill, the new Indian spot in Fitzrovia on the old Gaylord site from Rahul Khanna and Kabir Suri, the pair behind Indian group Azure Hospitality, had a bit of a stuttering start. The initial opening was pushed back from March 2020 to that October, only for another lockdown to close them again, but they finally managed to reopen for good this spring, and we have to say it’s been worth the wait.

The restaurant is named after one of the oldest neighbourhoods in Mumbai and it’s a good looking place – the design has been inspired by the art deco apartments found in the area with lots of warm yellows, deep oranges and greens, and an open kitchen at the back so you can see the chefs in action. Head Chef Avinash Shashidhara (previously River Café and Hibiscus) has created a menu that features dishes from across India. It’s split into small plates, tandoor/grill, big plates and sides but the portions are on the generous side so even the small plates aren’t really that small.

The classic street food dish papadi chat is a great way to kick off; with crispy sev, tomato, pomegranate, yoghurt, mint & tamarind chutney it’s sweet, tangy, crunchy all at once. We also loved the Pondicherry squid with fried courgettes and courgette flowers thrown in there for extra crispness. Between two of us, we followed that with one tandoor dish and one big plate, plus a tadka dal and a sourdough roti smothered with ghee, and that was more than plenty.

The Pali Hill chicken tikka comes in five plump pieces, lightly charred on the outside and juicy in the middle, with a refreshing pickled cucumber salad on the side. The Cornish lamb biryani was delicately spiced with perfect rice, and could have easily fed a third person, and we can confirm it tastes just as good the next day. After all that we could only manage a scoop of mango sorbet rather than a proper pud, but when the mangoes are that good you don’t need anything else.

London seems to be riding another wave of higher-end Indian restaurant openings and Pali Hill is a great addition to that, and with its basement cocktail bar Bandra Bhai, inspired by the old smuggling dens of India yet to open, it’s only going to get better.