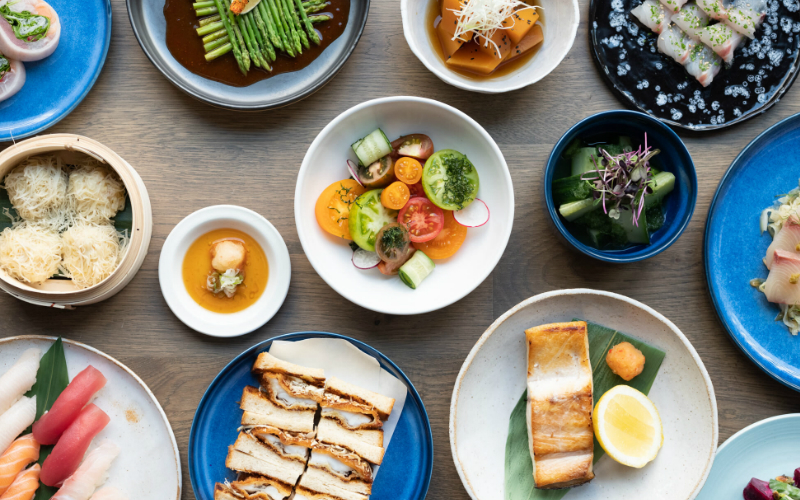 Aussie chef Shaun Presland, who was previously executive chef of the Sake restaurant group down under and is a bit of an expert when it comes to Japanese food, has finally arrived in London, though he has cooked at residencies here before. He was originally going to take over the old Foxlow site in Soho (now housing the incoming Bancone) but has now taken over 10 Heddon Street, after Chris Leach and David Carter’s celebrated residency came to an end. This does mean it’s not a permanent home for Pacific but will likely lead to one further down the line.

When we visited 10 Heddon Street a few months ago, it was warm and sunny and we sat outside eating pasta and drinking nice wine. Returning for Pacific in December, we raced inside to escape a torrential downpour and ice cold wind. Oh what a difference a couple of months make.

Pacific offers a mix of Japanese and Australian food, so there’s an all-day menu featuring sashimi, seafood and veggies, plus daily specials. We can absolutely recommend ordering the kimchi brussel sprouts and a glass of sake while you take a look at the menu – these crisp roasted sprouts come covered in an incredible spicy Korean vinaigrette that we were practically drinking out of the bowl at the end. If there’s more than two of you, you’ll need to order more sprouts – they are seriously that good.

Other early highlights include the spicy wagyu gyoza, and the monkfish katsu sando which you might have seen on a few people’s Instagram feeds. We were worried that this might be a half-assed cash-in on the katsu sando hype but we couldn’t have been more wrong. The meaty texture of the monkfish was a more than capable replacement for the traditional pork chop and, really, the katsu sando is all about that sauce anyway and it certainly delivered in that department.

The kingfish sashimi with jalapeño and yuzu is also worth ordering before moving on to the mains. We went for the miso toothfish, which has the same buttery umami flavour of black cod but without the price tag, so we can definitely recommend going for this. We also got the wagyu steak, served on a mini griddle and with three dipping sauces: BBQ; wasabi chimichurri; and ponzu. Perhaps not as exciting as what had come before, but a solid dish nonetheless.

We were very impressed by Pacific so it’s well worth checking it out while the residency is on. Here’s hoping Shaun finds a permanent site in London soon too.