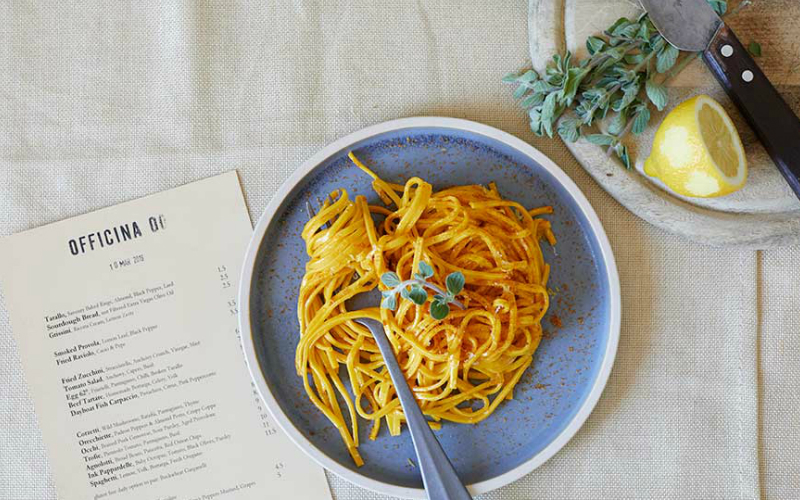 Have we reached peak pasta? In the last month or so we’ve had Pophams, 10 Heddon Street and Pasta Nostra open, joining the likes of Padella, Pastaio, Lina Stores and Bancone, so seemingly not. Now Officina 00 has come to the party, opening on Old Street inside the same development as Tayer + Elementary.

The workshop and restaurant, run by Elia Sebregondi (formerly of Bone Daddies and Kiln) and Enzo Mirto (formerly of Ella Canta), is industrially styled, with a green-tiled open kitchen and counter on one side, a white-tiled pasta making station on the other and wooden tables in the middle. The menu roams around regions of Italy when it comes to the shape of the pasta but the kitchen puts its own twist on the sauces.

As this place is all about the pasta, we went light on the other small plates, sticking to burrata with fried zucchini and tarallo crumble, the scattering of the southern Italian breadsticks and fried ravioli with cacio e pepe filling, which was basically a deep fried cheese bomb. The pasta portions are smaller than a standard main serving so you can easily do three between two. We did four because we’re extra.

The spaghetti with datterini tomatoes and basil was a great version of a classic, and the cappellacci with zucchini, mint and zucchini flowers was another excellent veggie option, especially for courgette fans, as the stuffed parcels come sat on a courgette puree. The linguine with egg yolk, lemon and clams was the restaurant’s version of a carbonara, swapping the pancetta for shellfish, and we also loved the corzetti (small discs of pasta, a new shape to us) mixed into a creamy sauce of wild mushroom, fennel sausage and parsley.

There’s only one pud on offer and it’s lemon and chocolate profiteroles. You get one of each, and they’re both big enough to share and light enough to eat after that serious carb fest.

There are eight pastas on the Officina 00 menu and we honestly would have ordered the lot. With solid options for vegetarians, shape and sauce combinations we haven’t tried before and the majority of dishes around a tenner or under, keep the pasta restaurants coming we say.