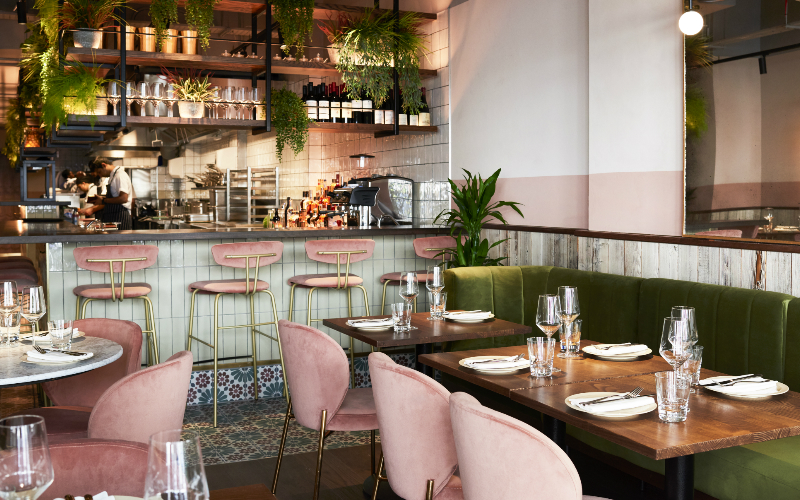 Nutshell first began life as a pop-up at the back end of 2018 with ex-Noma chef Leonardo Pereira in charge. But when the restaurant, run by husband and wife team Mohammad Paknejad and Marwa Alkhalaf, moved to its permanent home in Covent Garden, Jeremy Borrow (ex-Palomar) took control of the kitchen. Nutshell is inspired by Mohammed’s childhood in Tehran, and it’s even named after the pistachio orchards his family has had for over a century. The decor – lots of pale pinks and greens – nods to this, as does the food.

The menu is a modern take on Iranian food and is designed for sharing; it’s not that big a selection so you can get through a fair bit of it in one visit. If you want a break from booze, Nutshell has you well covered with their Iranian soft drinks, featuring homemade cordials and syrups.

The bazaar bread, with its salt and sesame seed topped crust, is a must, and it’s perfect for dunking into the yoghurt and cucumber dip that comes strewn with pistachios and pomegranates. The bread is also excellent for scooping up the smokey aubergine, which is a levelled-up version of baba ganoush with crispy shallots, walnuts and blackberries.

Both the tender lamb shank, sprinkled with pistachios and pomegranates and served with saffron rice, and the duck fesejun, featuring a spin on the Iranian stew made from pomegranates and ground walnuts underneath the meat, are total winners. If you’re veggie, the wedge of roasted pumpkin with a silky pumpkin puree underneath and hazelnuts for crunch, is extremely moreish too. Whatever combination of dishes you order, you need a portion of the tahdig chips. They’re very similar to the confit potato latkes at Bubala and the confit potatoes at Quality Chop House, so that tells you all you need to know.

The Persian sundae, a pretty little bowl of lemon ice cream, raspberries, more pomegranate and shards of nut brittle, is light enough to finish after such a feast. Nutshell is great place to have up your sleeve, especially amidst the madness of the West End.