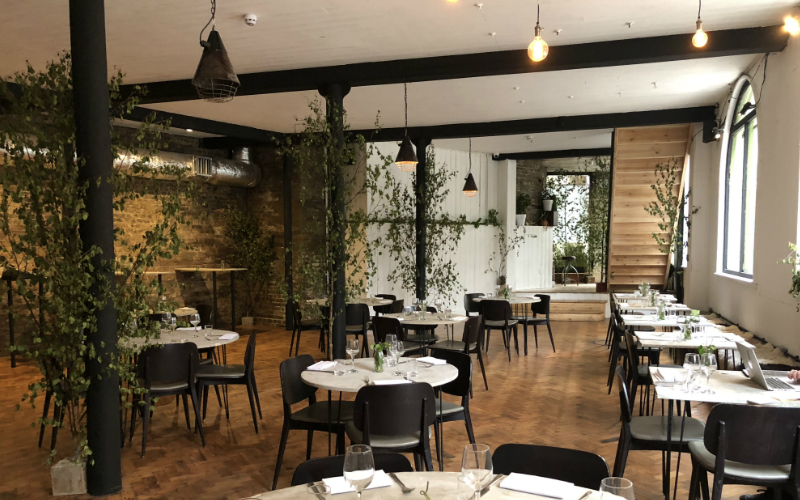 Formerly resident of a pretty tiny space in Neal’s Yard, Native  moved premises earlier this year and it now calls Borough home. Native 2.0 is much more spacious than the original and the team has really made the most of this by leaving plenty of room between the tables. The interiors are stripped back too with wooden flooring and stone-topped tables, which is very much in-keeping with the natural ethos of the place.

Whilst the space is new, not much has changed when it comes to the menu, in that it still celebrates the best wild food native to the UK and there’s still a big focus on sustainability and low waste. The chef’s wasting snacks emphasise this last point – you get a plate of three (generously sized) snacks made from surplus produce from the rest of the menu. We had a broccoli pakora, a venison bao and a crunchy piece of halibut, not unlike a prawn toast, and they were all fab. You’d be hard pressed to tell that these were made from off-cuts that would have ended up in the bin.

The wood pigeon kebab is Native’s signature dish, so we had to give it a try and we’d recommend you do the same. The pigeon is tender, there’s a real kick from harissa and the pickled cabbage cuts through the richness. Definitely better than the kebabs you’d stop for after a night on the bevs. As you’d expect with wild food, the rest of the menu changes according to what’s in season. We had an excellent halibut with sea cabbage and a dulse beurre blanc but our fave from the mains was South Downs venison with kale and jerusalem artichoke. Perfectly cooked meat plus earthy vegetables equals the ideal winter dish. We were pretty stuffed after all of that but still managed to squeeze in the quince sorbet with pain perdu and alexander butterscotch dessert.

If you never made it to Native when it was in Covent Garden, you really should make a point of coming to this one. And if you did go to original, you’ll know just how it good is.