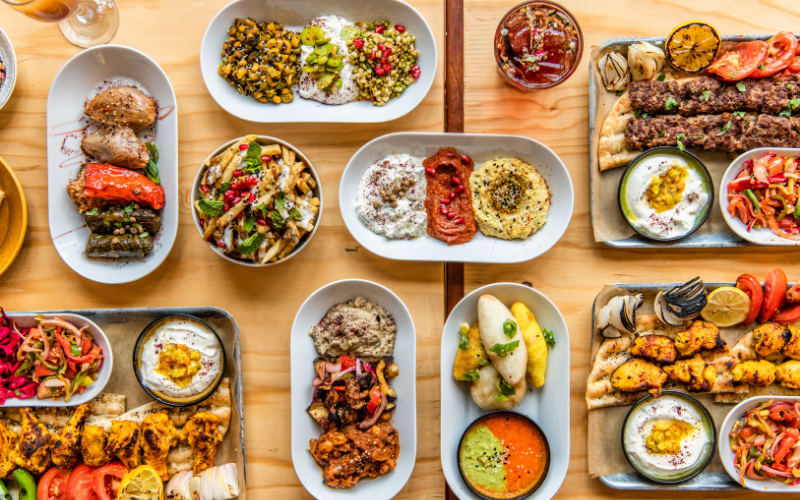 Some restaurants win you over as soon as you walk in the door and Nandine in Camberwell is one of them. The homespun decor – plywood, pink painted brickwork, rattan lampshades and cute little vases of flowers on each table – charms you and then the kitchen keeps you enthralled with the food.

Founded by Pary Baban, Nandine is a celebration of Kurdish food (Nandine means ‘kitchen’ in Kurdish). After she was displaced from her home in Kurdistan under the rule of Saddam Hussein, Pary spent time with relatives across the country, during which she collected recipes and documented regional dishes. She came to the UK in 1995, settling in South London, and started to sell Kurdish food in Elephant & Castle in 2007, before opening Nandine on Vestry Road in 2016 and then expanding to this site on Church Street.

From the first sip of the sumac & pomegranate g&t, a deep pink drink that starts sweet and ends almost salty, you know that Nandine doesn’t pull any punches when it comes to flavour. There are lots of veggie options on the menu, so we went without meat and honestly didn’t miss it from our meal at all. We started with more pink, this time from the bowl of sharply pickled veggies and the pink yoghurt and pomegranate seeds (along with mint and sesame) on top of the thin-cut zataar-dusted fries. It’s a beautiful tangle of potato that tastes just as good as it looks.

There was a change in colour scheme but not in moreishness with the vegan Kurdish dumplings, stout bulgur crust cylinders packed with spiced veggies, and the stew tapsi, a rich bowl of soft spiced aubergine, potato, tomato, courgette and onions topped with crispy garlic flakes. The grilled veggie platter switched things up in terms of texture, with crunchy and charred cauliflower, mushroom, onion, courgette and green chilli alongside spiced fried halloumi, flatbread and labenh ambeh dip. The only dish that didn’t hit the same heights was the tara cauliflower; though we liked the crispy batter around the outside of the veg, there wasn’t the same whack of flavour in the bed of spinach and black-eyed beans we’d had in the other plates.

We were too full for dessert at that point (they like to feed you here so the portions are generous) but we were talked into trying the homemade baklava. Thank goodness we were because it’s some of the best we’ve ever had; the crisp pastry and sweet stickiness from syrup is taken to a new level with different flavours of coffee, almond and coconut rose (which is almost macaroon-like in taste), and prettied up with petals for good measure. And if you don’t manage to finish them off in the restaurant, they’ll happily box them up for you to take home. Baklava for breakfast is no bad way to start a day, let us tell you.

Camberwell locals are lucky to have this gem in their neighbourhood but it’s worth travelling to Nandine for a true taste of Kurdish food.