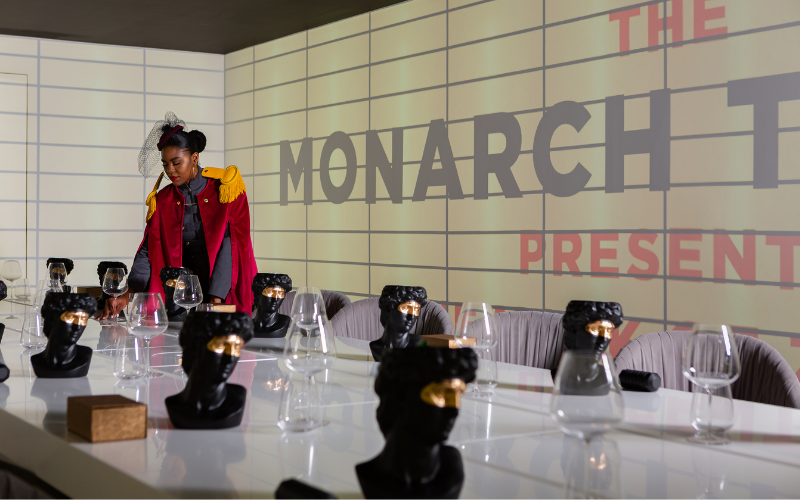 It’s fair to say there’s nothing else really like Park Row in London. The huge, loosely DC Comics-themed venue, which opened last year in central London, has been a huge hit, with the place always absolutely packed whenever we’ve been. While the main venue is more of a casual affair, with crowd pleasing dishes and live music, there is one unassuming corner that hides an inmate 20-seat restaurant called Monarch Theatre, which offers a set menu (including wines) and a whole lot more for £195 per person.

The ‘theatre’ part of the name is more than just for show – this really is a dinner experience rather than just a succession of dishes being served. The night begins with a drink in the bar – each guest has a coin to feed into a sort of scary fairground fortune teller machine and he will tell you if you have a dark or light soul, which in turn determines whether you get a dark or light cocktail as your welcome drink. The light version is coconut, Bacardi Carta Blanca White, Bacardi Coconut, pineapple, and Supasawa, while the dark is made from mezcal coffee, Fair Café Liqueur, Monkey Shoulder, vanilla, and cocoa bitters. Then comes a very fun welcome ‘snack’, which is essentially some kind of edible flavoured dry ice called Dragon’s Breath – once you’ve eaten it and expelled huge reams of smoke out of your nose you’ll understand why.

The host then leads you into the main dining room, with a long white table in the centre and every wall covered in a projector screen. Each course is themed around a different hero or villain from the DC universe, with the projections on the screen changing with each course to suit the mood. The host introduces each course with a bit of DC folklore and many even have a small game to get involved with – the very first course, based around The Riddler, has a riddle you have to solve which reveals the main element of the first dish. We won’t give you the answer but the most important thing to know is that it was an excellent start.

We won’t give too much away, as part of the fun of the dinner is all the little surprising moments and tricks, both in terms of the performance and the food. Many dishes are not quite as they seem at first glance…. a ‘poisonous’ mushroom parfait, for instance, or edible jewellery that you pluck from a mannequin hand. You might be wondering though if behind all the tricks, if the food is any good? We were actually quite impressed overall. The chef is Karl O’Dell (formerly of Michelin-starred Texture) so there is serious skill and flavour behind the dishes.

As we said at the start, there’s really nothing else quite like this in London. Whether it’s for you or not will very much depend on your interest in DC Comics and if you just want to experience something a bit different, with entertainment and theatre alongside your dinner. If either of those things appeal to you then we can very much recommend this as a fun night out in London, with some great, creative food included.