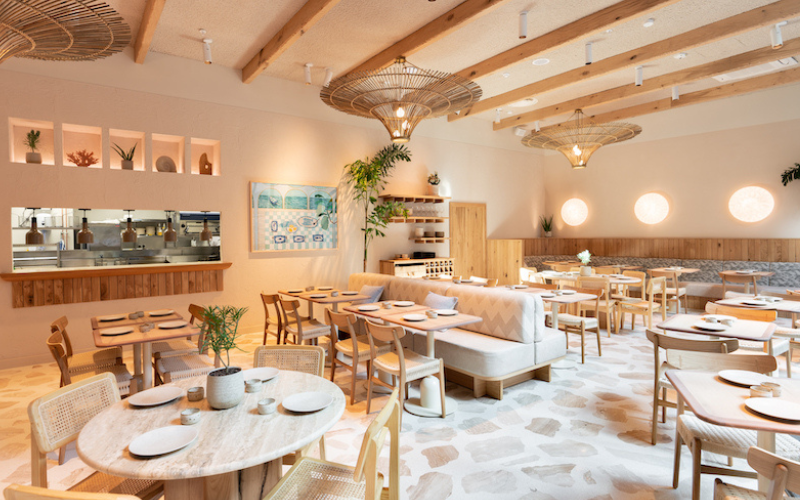 After doubling in size over in Queen’s Park in 2020, Aussie restaurant Milk Beach has expanded again, this time into Central with an outpost in Soho. Founder Elliot Milne and Head Chef Darren Leadbeater have moved into the Ilona Rose House building, a bright and airy space complete with an outdoor courtyard just off Greek Street. It’s a surprisingly secluded spot given it’s in the centre of Soho and it’s really bringing the relaxed coastal Aussie vibes; it’s all about neutrals and naturals inside (staff dress included) with lots of light wood, rattan and stone. There’s even a spesh acoustic ceiling to help soak up some of the noise, so it’s buzzy but not loud.

In keeping with that of the OG spot, Milk Beach Soho’s menu draws inspiration from the South East Asian and Mediterranean influences that make up Australian cuisine. Some of the signature dishes from the original site have made the move over, including the Chinese five-spice BBQ pork rib dumplings with chilli pho ga consommé and koji marinated chicken ‘schnitty’ with fermented chilli mayonnaise & chicken salt chips.

You can see why these became firm faves in Queen’s Park as the execution was on point – the dumplings were packed with rich meat in a surprisingly fiery broth and the chicken in the schnitzel was firm but still juicy and enveloped in a great golden crust – dipped in the punchy mayo, it’s everything you want from a bit of fried bird.

It’s a much larger offering in Soho so there are separate sections for raw dishes, veggies and robata, and that means lots of new dishes. The flavour combos have been just as well thought out as those signatures and there are lots of little touches that elevate the plates from the ordinary – cucumber and sake added bite to the Thai consomme under the Jersey rock oysters, the pistachio butter slicked onto baby gem turned the leaves into something indulgent, the smashed potatoes with lots of garlic were covered in slices of garlic plus a spread of black garlic hiding underneath, and the tare on the Belted Galloway bone-in ribeye turned up the umami, making for a superb bit of steak.

The only thing that promised more than it delivered was the Szechuan aubergine karaage, as the ratio of batter to flesh was off (it was half an aubergine in tempura rather than smaller nuggets) and it was too gentle in heat. Desserts were definitely back on track, and given it’s an Aussie restaurant we had to go for the Milk Beach renditions of two Down Under classics – the Golden Gaytime, here a toffee and buttermilk parfait topped with dark chocolate and an excellent honeycomb, and the Lamington, with the chocolate outer coating turned into a semifreddo on top of the sponge with Morello cherry and a coconut foam.

With low-intervention wines and interesting cocktails – the Skin Contact Spritz is a winner – it’s no surprise the restaurant is already getting packed out, and it’s something that’ll only continue when they start doing brekkie.