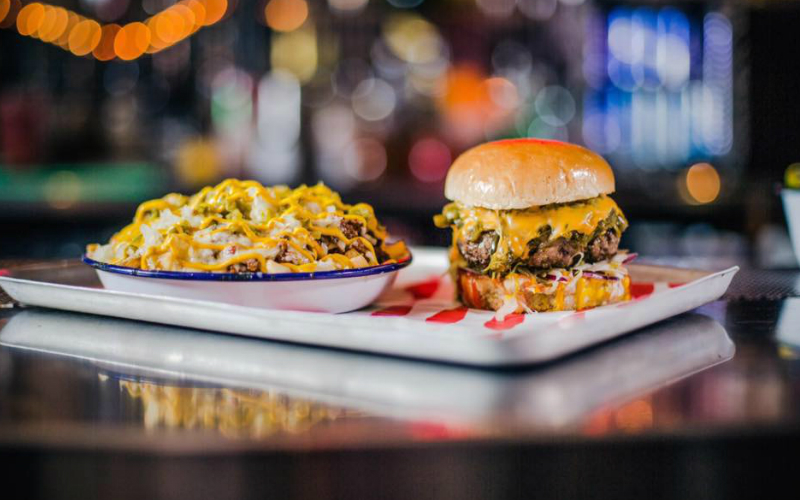 After eight years in the game, the original MEATLiquor restaurant on Welbeck Street closed earlier this year (to make way for a luxury hotel development) but the team quickly found a new home for it, and it’s literally just down the street.

The new (old) MEATLiquor has taken over the site of Match Bar and the same dive bar, rock ‘n’ roll vibe has been instilled in the new place. It’s a bit of a cave (intentionally) with black walls, plenty of neon signs, a long bar stocked with booze and a loud rocking soundtrack. We loved that an iPad gets passed around all the tables allowing the customers to choose the music too – we cued up a bit of Bruce Springsteen and Dire Straights while we waited for our food.

All the old menu favourites are present and correct and as it has been a while since we went to MEATLiquor we had to go for a classic order: a couple of signature Dead Hippie burgers and the Monkey Fingers, those buffalo sauce soaked chicken strips that are the things of dreams. We also tried a new side, the Hot Mess, which was three crispy hash browns covered in blue cheese sauce and jalapeños, and is now going to be an essential part of our default order from now on.

Booze is of course just as important at MEATLiquor and the tables at the new joint have a ‘poke for Jager’ button in the vein of Bob Bob Ricard which is a nice touch. There’s a big range of new cocktails too, some of which (like the Hard Shandy, with Jack Daniels and Brooklyn Lager, and the Radlerita, a frozen tequila concoction) will be available in 0.5, 1, 2 or 3 litre serves. Ridiculously large bevvies and a late licence sounds is a recipe for success (or peril, depending on how much you can drink).

Many burger places have come along since MEATLiquor and you may have your own favourites. But these guys started the whole thing off and when it comes to all-out fun and diet-ruining dishes, these guys are still top of the pack.