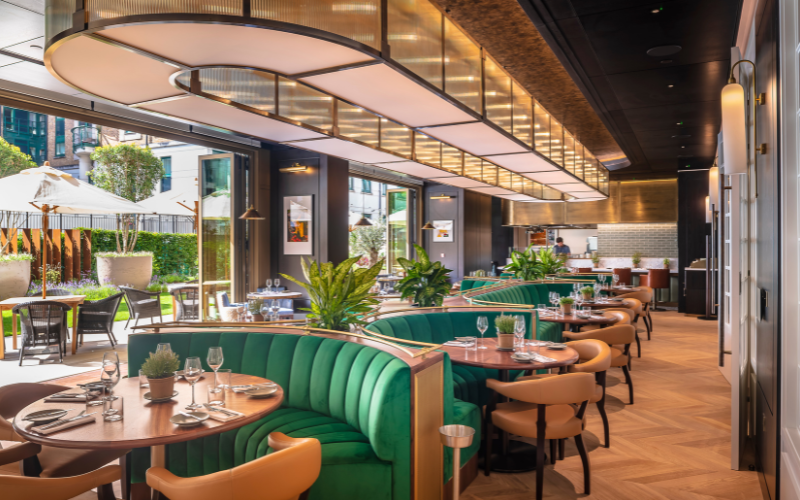 He already runs Italian joint Sorella in Clapham but Robin Gill has opened another, this time in Kensington – he’s really expanded the scope of his mini London empire, especially with wine bar Bottle & Rye recently opening in Brixton as well. Maria G’s is in a new-build residential development and set back off of a main road, so it’s not somewhere you’d walk past (the area isn’t exactly a bar and restaurant hub either) but it is worth seeking out if you’re in the neighbourhood.

The restaurant is inspired by Robin’s time working in the south of Italy and the fishing village of Marina Del Cantone. The interiors have a natural but luxe vibe (it is west London after all) with light herringbone floors, deep green banquette seating, tan leather chairs and a beaut private garden with al fresco tables. Like his other restaurants Darby’s and Bermondsey Larder, Maria G’s focuses on sustainability and makes use of the best seasonal British ingredients across a menu that’ll evolve from southern Italian dishes in the summer to northern specialities in the winter, with Italian wines and classic cocktails to match.

The menu has been developed together with Aaron Potter who is Maria G’s Executive Chef – Aaron used to work at Trinity in Clapham and has known Robin for many years – and the pair have really nailed it with a menu of fresh, light flavours for the summer. It’s concise, with just a handful of options for each of the sections, with at least one veggie dish in each one too. We kicked off with the excellent aged Parmesan fries; the focaccia (Robin always does good bread), which came with salsa verde rather than just oil, a simple but effective upgrade; and oozy La Latteria stracciatella dotted with slices of stone fruit to cut through the creaminess.

You can’t go to an Italian restaurant and skip the pasta course, so we opted for the Ivy House ricotta agnolotti with purple artichoke & datterini tomatoes, which was the perfect summer pasta – the parcels were plump but light, the sauce was rich but not heavy and the veg added a freshness to the plate, making it one of the dishes of the night.

The borlotti bean stew with summer vegetables also showcased the seasonal produce to its absolute best, and looked pretty to boot, not always an easy feat with a bowl of beans. We also loved the lamb with goat’s curd, broad beans and tomatoes, with its perfectly cooked meat, more beautiful summery accompaniments (including a side of barbecued Jersey Royals) and a light sauce to tie it all together. We can never resist a cannoli, especially when they’re chocolate and pistachio flavour and they’re as good as the ones Maria G’s is turning out. Don’t even contemplate sharing, cannolis are never for sharing, so get one each and avoid dessert envy.

We knew Robin could do Italian food with Sorella, and he’s shown us again with Maria G’s, where the restaurant is sourcing the best seasonal ingredients and letting them shine.