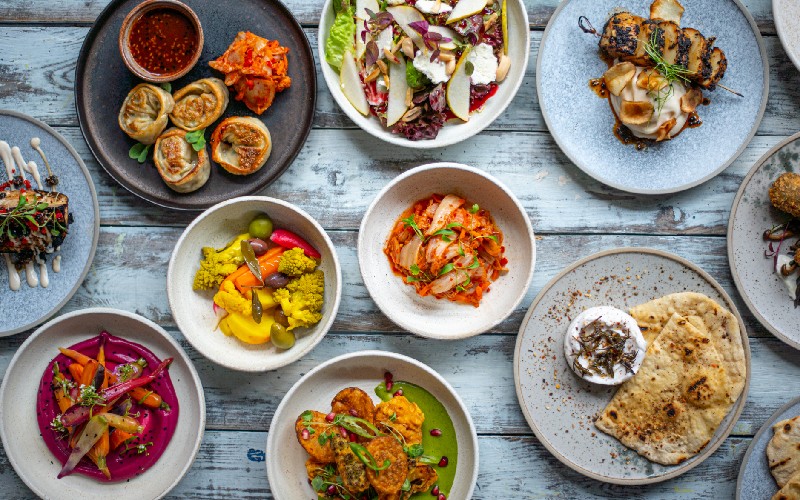 Borough Market has finally got a 100% plant-based restaurant thanks to the Mildreds team, who have opened brand new concept mallow. The menu for the all-day spot has been designed to be as low waste as possible, with many ingredients like vegan feta and labneh to garden pickles and jams made on-site, as well as vegan wines and cocktails on the drinks list.

While you can go down the starter and main route, we reckon sharing everything is the best way to eat at mallow, mainly because the small plates section is so good and you’ll want to go hard on this part. We could have ordered the lot but went for the cauliflower chaat, crispy nuggets of different varieties of cauliflower on a coriander yoghut; son dumplings with kimchi & a punchy gochujang dip; moreish porcini truffle croquettes with ailoi; and an excellent wedge of charred hispi cabbage dressed with tahini and chilli bean oil. We then split one large plate, the market thali, between two, and with masala market vegetables, kiri hodi, red lentil dahl, pumpkin methi pickle, chana basmati and flatbread on the tray, there was more than enough to go round.

Our waitress told us to save room for puddings and we’re very glad we did, going for the kumquat lemon meringue pie and creme brulee. The former had the tart curd and sweet meringue that you’d expect from a classic lemon meringue pie, with an added pop from the kumquat, and you’d never know it was a vegan pud. The latter was more set than you’d normally expect from a brulee, so set in fact that it was freestanding and not in a ramekin, but it still had the signature crisp sugar top alongside autumnal accompaniments of pear and dried fig.

mallow does what the best vegan spots do; it draws inspo from all over the world, makes use of texture and spice, and celebrates seasonal vegetables. We’re not the only ones who are fans, the restaurant had only been open a week when we ate there and they were already having to turn walk-ins away so they’re clearly doing something right.