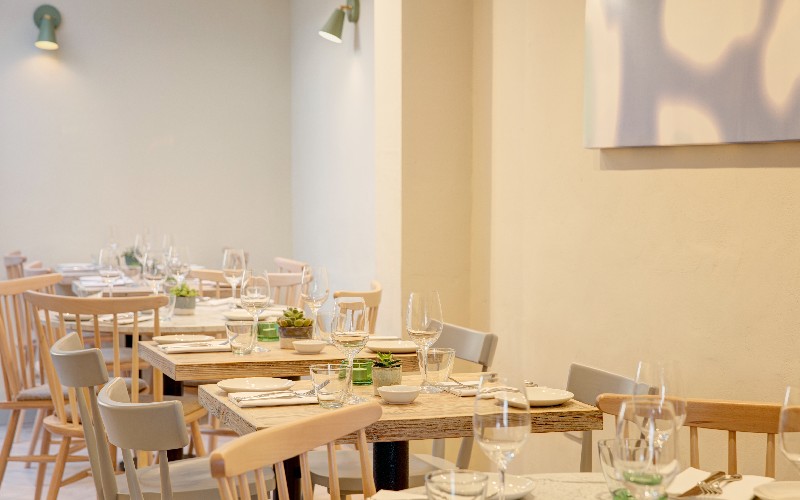 Victoria is a bit of a strange neighbourhood when it comes to food; on the surface you’ve got the slick Nova development with outposts of Sticks ‘n’ Sushi, Timmy Green, Bone Daddies and Vagabond, the two-Michelin-starred A. Wong on the other and then not a whole lot in between. If you dig a little deeper however, there are some gems to be found, and Lorne is one of them.

Founded by ex-Chez Bruce sommelier Katie Exton and ex-Brawn chef Peter Hall, who both worked at The Square together, it’s a relaxed but quality neighbourhood style joint and it’s been a hit with critics and locals alike since it opened in 2017. And with every table filled on a Tuesday night in 2021 it’s still going strong. Peter has departed the restaurant so now Graham Brown, who’s been at Lorne since the beginning and has also worked at The Square as well as New York’s Eleven Madison Park, is in charge of the kitchen. He’s celebrating locally sourced and seasonal produce with his menu and his dishes for September strike a great balance between freshness and richness.

It was lingering summer with our starters of ajo blanco with studded with balls of melon, cucumber & fennel and grilled sardines on toast, an inventive take on soup and a sarnie, and a really fresh cured sea bream with avocado mousse, marinated peppers and shards of bottarga-topped carta di musica bread. We then shifted into autumn with the mains of roast duck breast with duck leg tart, sour cherry puree, potato fondant and cavolo nero, which was as sticky and rich as it sounds, and a luxurious veggie dish of grilled hispi cabbage with creamed polenta, and a girolle & sweetcorn persillade, covered in a blanket of autumn truffle and pecorino.

It was the battle of the tarts for dessert; brown sugar with malt barley ice cream in one corner, roasted fig with pistachio cremeux, fig leaf ice cream and honeycomb in the other, and the latter was the clear winner in our books.

As you’d expect from somewhere co-founded by a sommelier, the wine is of as equal importance as the food and Lorne has a well-curated list that has plenty of variety but isn’t as a thick as a bible and isn’t full of scary prices. That really sums up the whole experience at Lorne – great service and great cooking with a laid-back attitude.