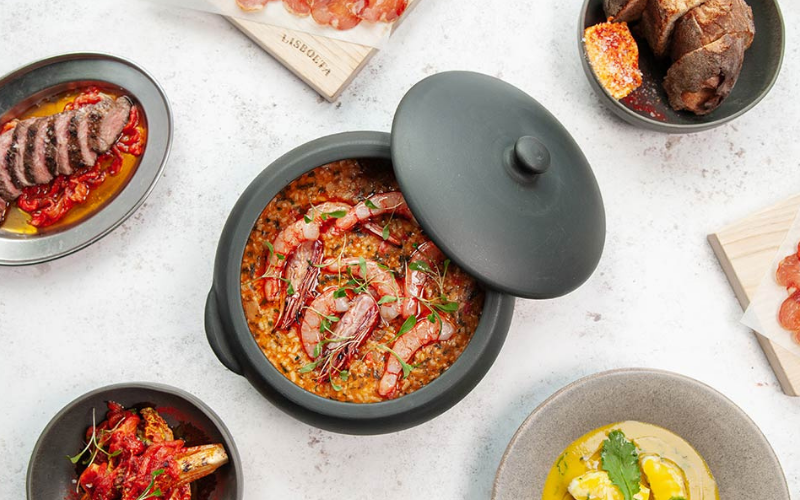 Nuno Mendes is back. After a few years spent working on various projects both in the UK and Portugal, Nuno now has his very own London restaurant again – and it’s an absolute stunner. Lisboeta opened in March on Charlotte Street and as the name suggests, it’s a love letter to Nuno’s native Lisbon, paying homage to one of the world’s great food cities.

Before we get to the food though, it’s worth mentioning what a beautiful restaurant this is with the interiors having been designed by Nuno’s friend, architect João Guedes Ramos. When you enter on the ground floor there’s a sleek dining counter backed with built-in wooden cabinets in the style of a traditional Portuguese pharmacy, which then runs through to the open kitchen at the far end. If this was the sum total of the restaurant it would still be great, but there’s much more to come upstairs, with a lovely buzzy dining room filled with light from a huge new skylight and covered with pictures and artworks from Portugal, many from Nuno’s personal collection. It’s a very nice, welcoming place to eat.

The strong first impression is more than backed up by the food. We started with three from the snacks menu: the must-order ‘Vindalho Empada’, a Goan-spiced pork pie topped with a thin sliver of copita ham; the ‘Morcela e Lingueirão’, two fingers of fried bread topped with morcela sausage and razor clams; and slices of soft Portuguese sheep’s cheese from Serrade Arrábida.

Next up is the Petiscos section, essentially Portuguese small plates. We loved the smokey beef tartare with house pickles, and the Mushroom Açorda – juicy braised mushrooms with an egg yolk and bread sauce. From the large sharing dishes, the seafood rice is a knockout 10/10 dish. Smooth, buttery seafood-infused rice, topped with huge red prawns and razor clams. We didn’t have room for dessert this time around but we have an eye on the egg yolk &pork fat custard with port wine caramel for next time.

The wine list is 100% Portuguese and there’s some great bottles on there from the Duckman Duck Pet Nat to the Aphros Palhete, one of our favourite styles of wine that blends white and red grapes. Lisboeta’s own wines also feature, produced with partners from Quinta do Montalto, alongside special collaborations with friends of Nuno which will be appearing on the menu over time.

Lisboeta is one of those restaurants where everything is singing in harmony, from the pitch of the menu to the design, atmosphere and service. We were big fans and will definitely be back again soon.