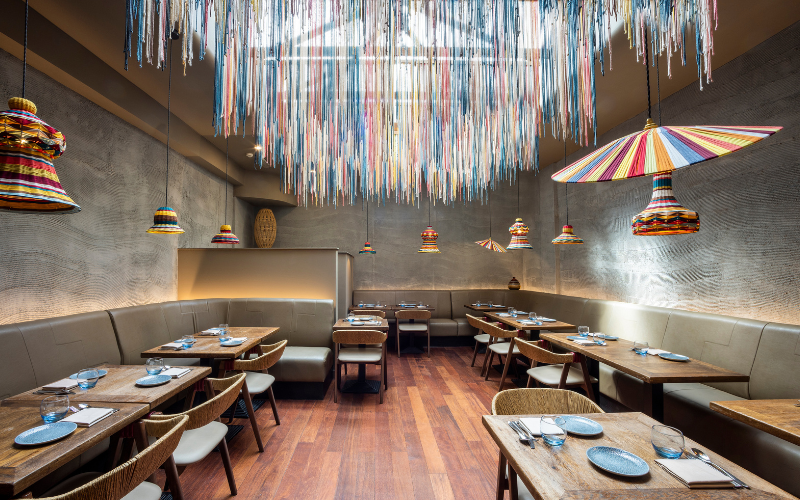 Ten years is a long time in the London restaurant game, so reaching that milestone is worthy of a celebration. Lima, a pioneering Peruvian restaurant and the first one to win a Michelin star, has marked the big 1-0 by revamping the restaurant and cooking up a new menu. Quipu, coloured knotted strings used as a record-keeping system by the Incas, are the centrepiece of the dining room, hanging from the skylight and formed into vibrant lampshades, contrasting against the textured walls.

The menu, created by new Culinary Director Roberto Sihuay, focuses on the three lands of Peru – the Andes, the Amazon and the coast – as well as showcases the Chifa and Nikkei cuisines that have developed thanks to Chinese and Japanese immigration to Peru. There are some Lima classics that haven’t gone anywhere, like the perfect pisco sours and classic ceviche.

Ceviche features heavily across the menu, so if you don’t go for the classic there are plenty of other options. We loved the ceviche of the day taco, with super fresh, firm pieces of stone bass on a zingy huacatay sauce; the tuna tiradito (sliced rather than cubed fish), which had great texture from the addition of fried baby squid; and the ceviche caliente, a warm take on the dish with a flaky fillet of stone bass and a fruity, spicy aji amarillo tiger’s milk.

As good as the fish dishes are, two of the best dishes we had were actually vegetarian – soft confit leeks with a parmesan sauce and basil tiger’s milk, and the red onion asada, slow-cooked onion presented as flower petals topped with sweet potato puree, with dark lager and tiger’s milk combining to make a moreish sauce.

Desserts were more of a mixed bag. The poached pear on the pear dessert was curiously lacking in flavour, though the lime sorbet and fresh pineapple certainly delivered on that front. The sweet tamal, Lima’s take on a Peruvian breakfast, divided the table as well – the corn dough mix topped with a cinnamon foam and layer of jellied coffee was almost verging on savoury, so one for those of you who don’t like puddings to be overly sweet.

Dishes are beautifully plated with all the colour and vibrancy that Lima has become known for, and while the menu doesn’t feel as groundbreaking as when the restaurant first opened, there are some gems on the new menu. Here’s to the next ten years.