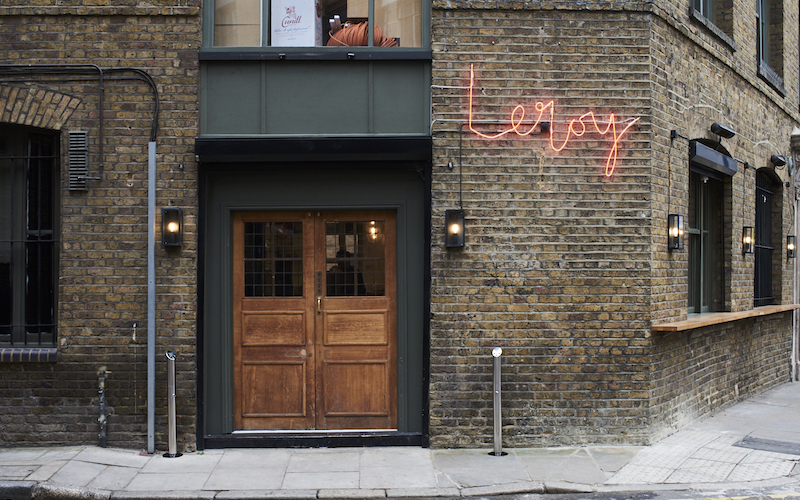 Michelin-starred Ellory closed at the beginning of March, which could have been sad news but for the two silver lined clouds above it. Firstly, Clapton’s P. Franco is taking over the space off Mare Street vacated by Ellory and secondly, the Ellory boys have just opened Leroy in Shoreditch with the same front of house and kitchen team.

Whereas Ellory was a fairly serious restaurant with evening tasting menus, Leroy is to be a more relaxed affair influenced by the new wave of Parisian wine bars such as Clown Bar and Septime La Cave. The space is lovely, a sort-of triangular site with lots of natural light, a bar/counter area with high stools and an open kitchen. It’s got a lot of charm and character and it already feels quite settled in, even though they’ve only been open a couple of weeks.

There’s a range of snacks and sharing plates on the menu, as well as cheese and charcuterie so it caters for all occasions – we’d happily come back for the terrine, a plate of cheese, and a glass of wine at the bar. We’d definitely recommend coming by for a full dinner though as there’s some really fantastic dishes here, reminiscent of Ellory but a bit more relaxed and fun. Our pick of the snacks had to be the smoked eel with quail egg and crepe parmentier – we really could have eaten about six of these – although the big bowl of whipped cod’s roe and crisps is another winner to nibble on while you decide on everything else.

From the selection of bigger plates the richly satisfying white asparagus, smothered in egg yolk, thin strips of near-translucent lardo was richly satisfying but the plump round ricotta dumplings with peas was the standout. We also went for a beautiful tranche of brill served with capers, monk’s beard and a side of crispy potatoes which near-enough finished us off.

Co-owner and sommelier Ed Thaw is in charge of the 100 bin wine list which is drawn from his favourite producers from around the world as well as serving Leroy’s own Vermouth and wines from Vigneti Tardis, their winemaking project in Campania with Michael Sager, Jackson Boxer and Stevie Parle. We had a glass from the latter and it was a joy.

With Jackson Boxer about to open St Leonard’s just around the corner in a few weeks, plus Smoking Goat and Brat already open a stone’s throw away, it’s interesting to see Shoreditch being a major draw for cool independent restaurants again.

For our favourite London restaurant, see our Top 20 guide here.