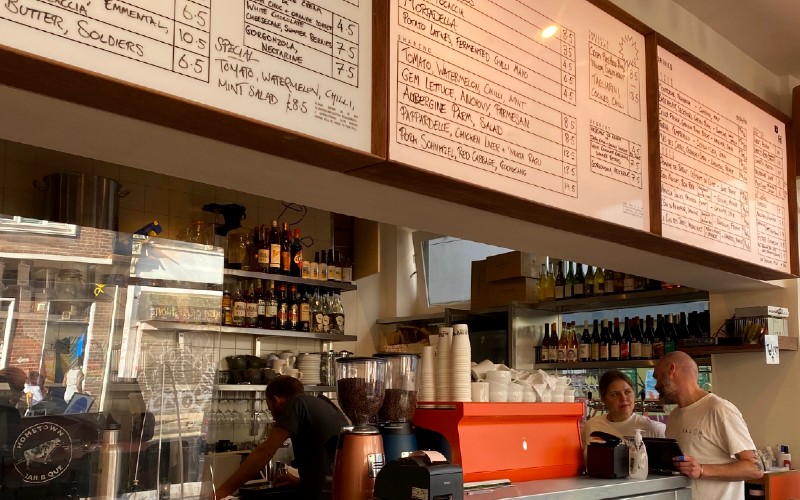 The Levan team has expanded its Peckham empire by opening Larry’s right next door (previously home to Brick House Bread) and in doing so, completed the homage to the legendary DJ Larry Levan. Larry’s is inspired by New York delis and with its green chairs, orange tabletops and lightbox menu above the open kitchen, it’s polished but still relaxed.

Both the food menu and drinks list are pared down so ordering is an absolute breeze – between four you could easily order all of the dishes. We went straight in for the carbs with potato latkes with fermented chilli mayo and the ‘nduja foccacia, slicked with plenty of oil for mopping, with some green coming from the gem lettuce, albeit covered under anchovy dressing and parmesan.

There are always a couple of specials on each day, and on our visit one of them was a crispy pig’s head bun with sauerkraut and more of that ‘nduja – it had crunch, sharpness and heat, everything you want from a sandwich. More crispy pig followed in the shape of the pork schnitzel with day-glo red cabbage and gochujang mayo, alongside a gloriously gooey aubergine parm. We finished off with a classic white chocolate cheesecake with summer berries, just like the ones you’d get across the pond.

It’s all about comfort food done well at Larry’s and the daytime menu, which includes cinnamon babka, soft boiled eggs & mortadella and salt beef sandwiches, sounds like a winner too.

WIN A THREE-MONTH SUPPLY OF BREAD FROM KARAWAY (278)

THE YAYOI KUSAMA INFINITY ROOMS ARE COMING TO THE… (110)

ALL-YOU-CAN-EAT CHEESE AT THE CHEESE BAR (92)