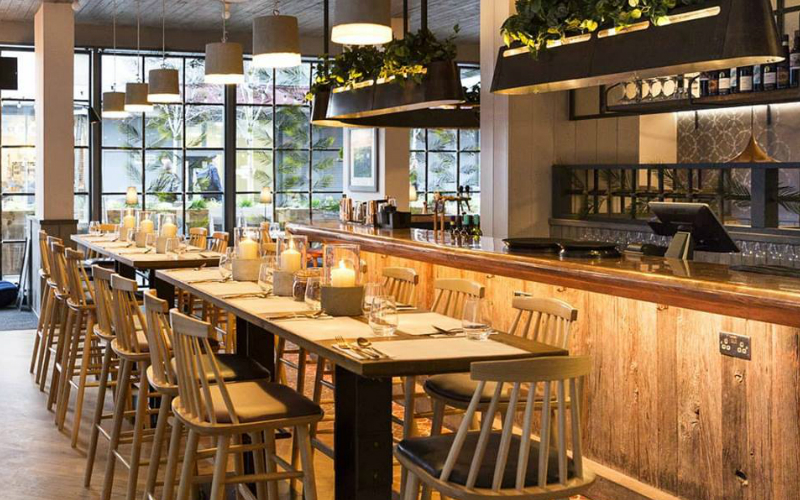 We were big fans of the Lahpet pop-up in London Fields so we were very happy to hear about their new permanent site in Shoreditch, which is now open. There aren’t too many places serving Burmese food in London and Lahpet do it very well indeed, finding a good balance between traditional dishes and some more modern creations.

The new site, which was previously Tapas Revolution, is certainly a big upgrade form their previous digs, with a swish central bar, open kitchen, a big long sharing table plus some comfy booths. Most of the dishes from the pop-up have made it on to the menu here, including the eponymous lahpet, the traditional the leaf salad found all across Burma. There’s plenty of new things to try too and despite having such good memories of the pork curry and the mohinga (a traditional fish stew) we decided to try some of the new things.

From the small plates section the yellow pea paratha was an all out winner but the steamed dumpling divided us – it has a slightly glutinous texture, which maybe isn’t to everyone’s taste but at least one of us was a fan. From the salads section the lahpet is must order and we also enjoyed the roasted aubergine salad, which is a new addition. The two mains were the standouts of the whole meal however, the big bowl of coconut chicken noodles being a particular highlight, closely followed by the lamb, which had been shredded and stuffed inside black cabbage leaves and served with runner beans and carrots.

Lahpet is a great restaurant, offering something you can’t really find elsewhere in London, so you should make a particular beeline for it if you’re craving something new.