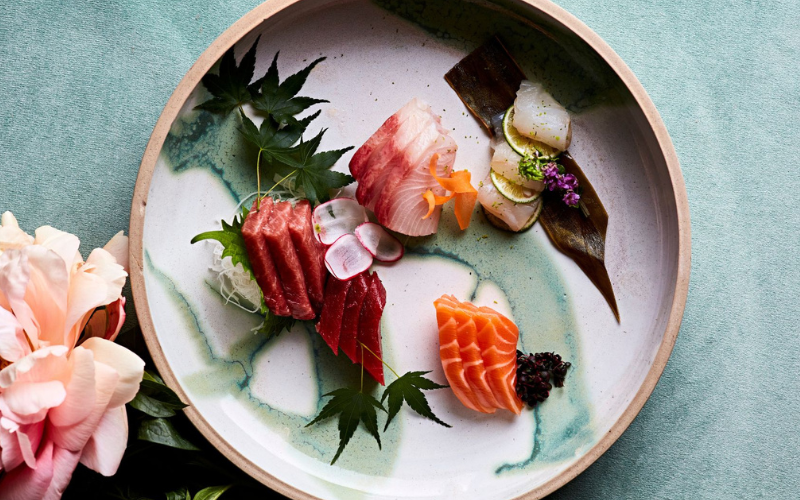 She’s already got Chinese restaurant MiMi Mei Fair and Indian spots Jamavar and Bombay Bustle to her name, and now Samyukta Nair has taken Japanese food with her latest opening, KOYN. Like Nair’s other restaurants, KOYN has a strong concept – it’s inspired by the duality of Mount Fuji and the balance of modernity with tradition. The two-storey space is divided into two distinct areas; Midori, a green room on the ground floor representing life on the peak with Magma, representing an active volcano, below.

The execution is subtler than it reads, with a zen garden feel upstairs thanks to soft greens and light tones, with moodier, nighttime vibes downstairs, where the room is decked out with lots of black timber, burnt orange accents, a terracotta sculpture wall, and lower lighting. It’s very designed, it’s contemporary and it’s very Mayfair, right down to the DJ that starts spinning after 9pm.

The areas may be distinctly different, with a robata grill downstairs and a sushi bar up top, but the same menu, created by Exec Chef Rhys Cattermoul (ex-Nobu) is available throughout the restaurant. It’s an extensive one that has Japanese classics – veggie tempura, rock shrimp, spicy tuna rolls, black cod and the like – alongside some more inventive dishes. The aim is to balance the wants of the international set who come to Mayfair and know what they like with Londoners who are looking for something new. It’s also littered with luxe ingredients, from caviar and lobster to king crab and wagyu.

The staff are only too happy to offer recs, so once you’ve ordered a cocktail, like the Midori margarita with wasabi, ask them for some pointers. We ended up with an excellent salmon tataki, with really clean fish wrapped around julienned cucumber offset by a moreish mustard miso sauce; a perfectly flaky piece of Chilean seabass pimped with a shiso salsa verde; and a ridiculously decadent hay-smoked lobster smothered in umami butter.

The wagyu ishiyaki served on a sizzling hot stone, with yakiniku sauce, kombu salt and wasabi is as an indulgent and buttery piece of meat you could ever hope to eat – it’ll set you back a pretty penny but it’s a real showstopper. The gochujang pork belly gives it a run for its money in the richness stakes though, fatty and melting in the mouth, and if you’re a fan of a good chop, the hojicha-smoked lamb with spicy kuromame miso offers a funky take on the cut thanks to the use of tea and black bean miso.

KOYN is Mayfair through and through; it’s seriously luxe and both the ingredients and price reflect that, so be prepared to leave with a significantly lighter wallet than you came in with. If you’re ready to indulge though, you’re defo in the right place.