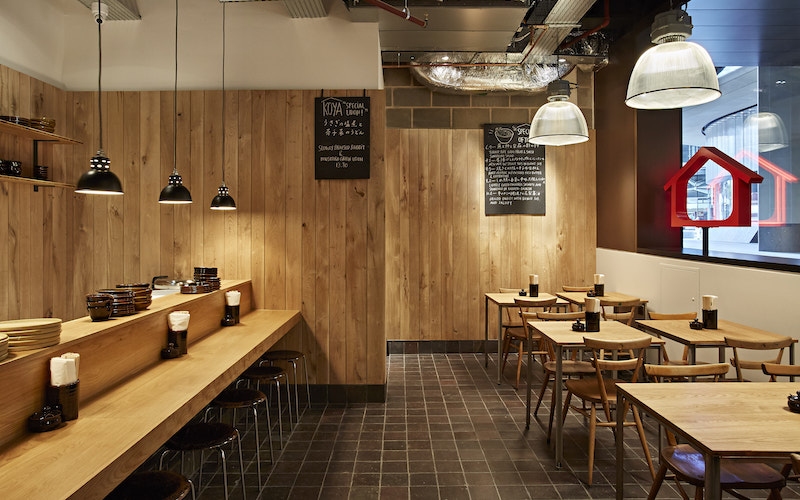 When the original Koya opened on Frith Street back in 2010 it was a very welcome addition to London’s restaurant landscape. With its minimalist interiors and short menu focused on udon noodles, it was something we hadn’t really seen before and to this day, nobody has even tried to emulate it. Even though the original has now closed, it is survived by Koya Bar, next door to the original location plus a stall at Market Halls Victoria and the biggest site at Bloomberg Arcade in The City.

Although there is charm to the small size of the other Koyas, which could be plucked straight out of Tokyo, the Koya City restaurant, comparatively huge, does make for a slightly easier experience. It also means a bigger kitchen and a bigger menu which can only be a good thing. At its heart though Koya is still all about the udon noodles. As before you can choose from hot noodles in hot soup; cold noodles to dip into hot soup; and cold noodles with cold sauce to dip or to pour.

Hot noodles and hot broth is the most popular and has the greatest number of options. We went for one of the day’s specials a spectacular kedgeree-inspired number that had a thick curry soup, flakes of smoked haddock, and an egg. With one us fighting the flu, we also went for a clear chicken broth version with steamed green vegetables – it didn’t provide a magic cure but it was a perfect winter dish regardless.

Koya’s menu of small plates are no after thought either. The tonkatsu (available at dinner only) we had here was exceptional, easily the best we’ve found in London and even rivalled many we’ve had in Japan. Other highlights were the crispy prawn heads (a regular special from Soho that have found a permanent home here) and the marinated mushrooms.

It’s good to see that as Koya has morphed and developed over the years that it’s still capable of delivering knockout, original food. It’s definitely one of our favourite Japanese restaurants in London.