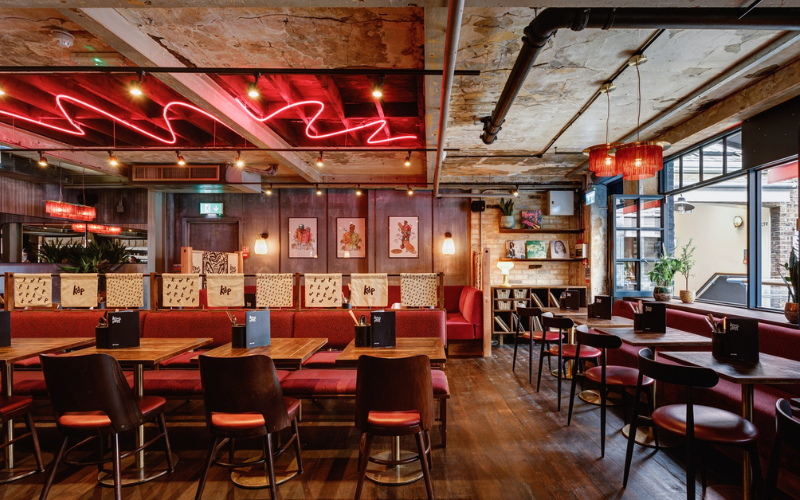 LA’s Koreatown has come to London in the shape of Korean Dinner Party in Kingly Court. The Senor Ceviche crew are behind the spot, and it’s mashing up East-meets-West with aplomb. There’s Korean and SE Asian hip-hop and electronica on the stereo, stripped back interiors featuring Korean wall art and a food menu designed by Ana Gonçalves and Zijun Meng of TATA Eatery (who’ve also smashed the food at Mr Ji) that references Korea, the US, Mexico and Japan.

As you’d expect from those two, the menu here is full of bangers. The bacon mochi, caramelised bacon wrapped in rice cakes and drizzled with gochujang caramel, gave that familiar sweet-salty mix in a totally new and inventive way, and the stuffed peppers, which appeared understated – a green chilli stuffed with melted cheese and blanketed in a spicy red sauce – had sweetness, heat, smokiness and punch.

We couldn’t come to a Korean restaurant and not indulge in two Korean staples. The Korean corn dog, the Insta-famous dish of half hotdog, half mozzarella wrapped in corn dough, topped with ketchup and mustard, had been made even more ‘gram-worthy with a special gold paint job for the Jubilee. And their version of Korean fried chicken, which had an exemplary batter, along with garlic cream, parmesan and rice sticks, making it stand out even more.

The Mexican influences really come through with the tacos, with pork al pastor, beef short rib and Korean Fried cauliflower amongst the filling options. We went for the short rib ones, served with Asian slaw, ssamjang, chilli relish and tortillas, and though the meat itself had great flavour, it was cut into chunks rather than being shredded, making it chewy and tricky to eat in tacos – either cooked to a softer texture or a different cut of steak sliced thinly would have made the eating experience much better. There were absolutely no issues with the dessert; vanilla soft serve, caramel and cornflakes is a winning combo.

Cocktails are just as innovative as the food, with Yakult Royales, Burnt Rice Old Fashioneds and Michelada Boilermakers on the list. This is one fun place to have a dinner party, and you don’t have to do any of the work.