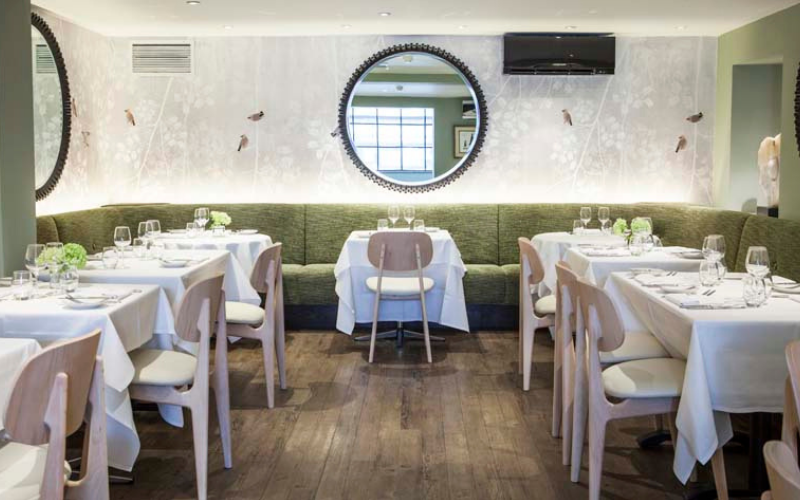 Kitchen W8, located just off Kensington High Street, was launched in 2009 by co-owners Rebecca Mascarenhas and Phil Howard, with Chef Mark Kempson at the helm. It was awarded a Michelin star in 2011 so it’s celebrating a decade of that accolade this year. Having always wanted to eat there we thought this year would be the perfect time to go and check it out.

With autumn well upon us and the nights drawing in, it was already dark by the time we arrived for our early dinner, and we settled into a cosy corner in the back. This time of year brings plenty of new seasonal ingredients too and Kitchen W8 are currently offering lots of game dishes, and a truffle tasting menu to celebrate.

We went all in for a game tasting menu (no longer available but there’s still plenty of game dishes on) just to try something different. We were a bit concerned about it being too much game, which can of course all be quite rich and heavy, but happily the menu was very well balanced and thought out.

We began with what was essentially a mini hotdog – but not any old hotdog of course. This one featured a wild duck sausage, BBQ beetroot ketchup, and crispy artichoke in a brioche bun. Just a couple of bites but a brilliant and fun way of serving game. Next up was ‘hare bresaola’ which had the potential to be quite full-on but was in fact treated very lightly, with the cured hare meat served with crisp autumn leaves, persevered damson, celeriac and honey truffle.

Fillet of fallow deer was the first of two more ‘main’ courses, a beautiful rich cut of meat served with potato skins that had been stuffed with a deer ragu and a black pepper emulsion. Next up was roast partridge breast accompanied by a mini pie bursting with a whole host of autumn flavours – chanterelle mushrooms, squash, and truffle liquor. We finished up on a classic rice pudding with roast pear, hazelnut and ginger, a perfect dessert for autumn.

All in all, Kitchen W8 is a great spot; relaxed but quite old school, which is to be expected given its location, and we were defo the youngest people in there by quite some way. However sometimes a bit of old school glam is what’s needed and the food and wine were excellent. On the way out we spotted a really nice private dining room which is actually right at the front of the restaurant rather than hidden away at the back. It could be a great option for a Christmas group dinner with friends or colleagues if you work around that way.