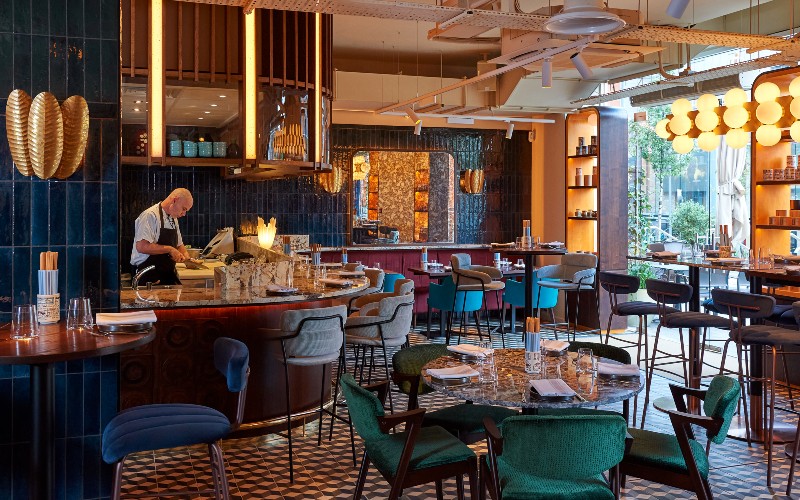 The concept of Jiji does appear unusual at first glance but in reality, the menu is a mix of distinct Japanese and Middle Eastern dishes rather than the fusion of two on one plate, bar a few crossover elements, like the soy marinade for the onglet (served with smoked aubergine cream and Jerusalem artichoke crisps); tofu cream on the excellent roasted cauliflower (with charred crispy leaves, Ezme salad and nuts); and aubergine appearing on a lot of dishes, even an aubergine sashimi.

The Japanese dishes we tried (there’s a separate sushi menu and then a handful of larger plates on the main menu) were also very good. The sando schnitzel, essentially Jiji’s take on a katsu sando, was a succulent piece of breadcrumbed chicken between two paper thin slices of Japanese milk bread served with yet more aubergine, this time in the form of ‘chips’ aka crispy coated fried chunks. And the sushi was an unexpected highlight of the whole meal; the tuna & avo tartare nigiri with truffle sauce was fantastic and the scallop nigiri with unagi sauce, creme fraiche & salmon roe was one of the best pieces of sushi we’ve had anywhere.

There are only two desserts on offer at Jiji – there’s a lot of interesting food on the savoury menu so that’s where you’ll want to focus on anyway – and we just split one, an artfully deconstructed apricot cheesecake with roasted fruit, lemon gel and a sprinkling of nuts.

You won’t find many menus that take you from spicy tuna rolls to aubergine with Israeli salad and feta but if you like the flavours of Tokyo and Tel Aviv, you’ll find a lot to love at Jiji.