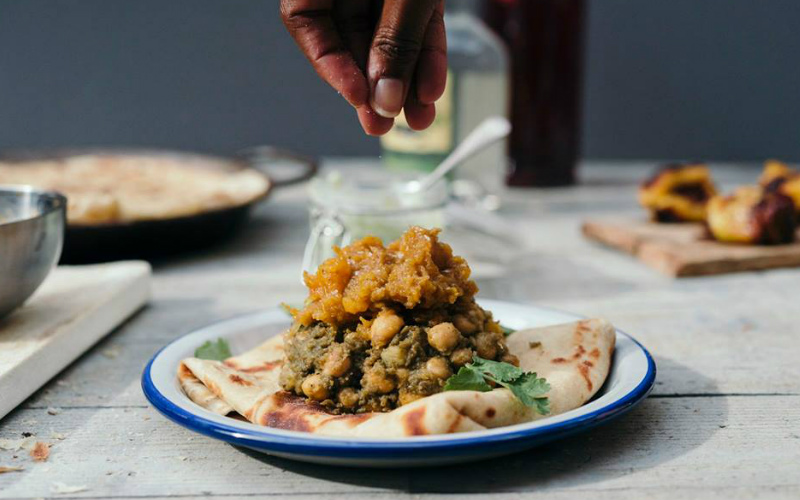 After popping up about town with Rotishop and Rumshop, Island Social Club, run by Marie Mitchell and Joseph Pilgrim, has settled down at Curio Cabal in Haggerston, taking over the space Wednesdays – Saturdays, and it’s clearly already a hit with locals as it was packed on our visit.

Marie heads up in the kitchen, cooking the short menu of curries, roti and sides. Though it changes slightly from month to month, there’s only a handful of dishes to choose from, so you won’t spend ages agonising over what to have, and if you’re in a group (or just very, very hungry), you can easily order the lot.

Between two, we went for the curry mutton, packed with ginger and garlic along with tender meat, and colombo de poulet, a chicken curry laced with coconut milk and pumpkin, which was the milder of the two in terms of heat but moreish thanks to its rich sauce. The roti, made in-house, is excellent and there’s plenty of curry to mop up so don’t hold back – order at least one each – and add a side of plantain and a pot of mango chilli sauce for dipping whilst you’re at it.

Rum is the other pillar of Island Social Club, with a concise list of punches and island cocktails on offer, so you really can’t come here and not try at least one. The Maboat punch, made using Joseph’s dad’s secret Grenadian recipe and Clarke’s Court overproof rum, went down a treat.

Island Social Club also has a roster of events including music, supper clubs, and exhibitions, making it a great place to explore Caribbean culture and cuisine. That island sunshine is unfortunately not guaranteed but good times are.

HOW TO TAKE A BREAK FROM THE SCREEN (1)