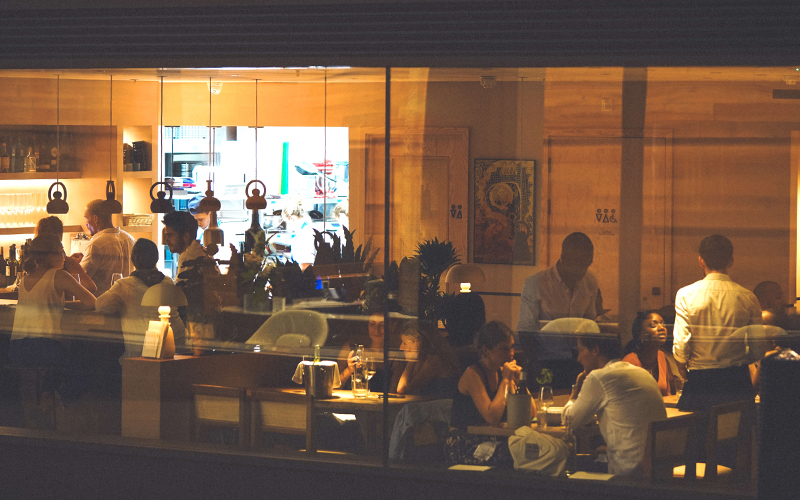 Although it opened back in 2017 and won a Michelin star in the autumn of 2018, it’s taken us a while to get round to Ikoyi. Owned by Iré Hassan-Odukale and chef Jeremy Chan, the restaurant in St James’s Market combines British produce with West African ingredients largely unseen in London, like ogbono seed, tiger nut, long pepper and grains of paradise, to create a unique food style. This same ethos is carried through to the drinks list, where these ingredients are used to put a twist on classic cocktails.

We went by one lunchtime for the set menu, which consists of a snack, two courses and an optional dessert. A slice of fried plantain dusted with a vivid pink raspberry powder, served with an extremely fiery scotch bonnet mayo was up first and it really set the tone for the meal – they don’t pull their punches when it comes to bold flavours here.

An earthy dish of malted barley bread, caramelised pumpkin and groundnut came next, followed by our favourite of the day, aged beef and ndole (a bitter leaf) with smoked crab jollof. Jollof rice differs slightly all over West Africa and they’ve certainly put their own spin on it at Ikoyi, using crab meat and smoking it tableside. The dessert – a walnut and coffee concoction that was somewhere between an ice cream and a sorbet – was a great palate cleanser to end on.

It’s not often we have a meal where every course has something on it we’ve never tried (or even heard of) before, so that in itself is reason enough to go Ikoyi, but the food also happens to be fantastic too.