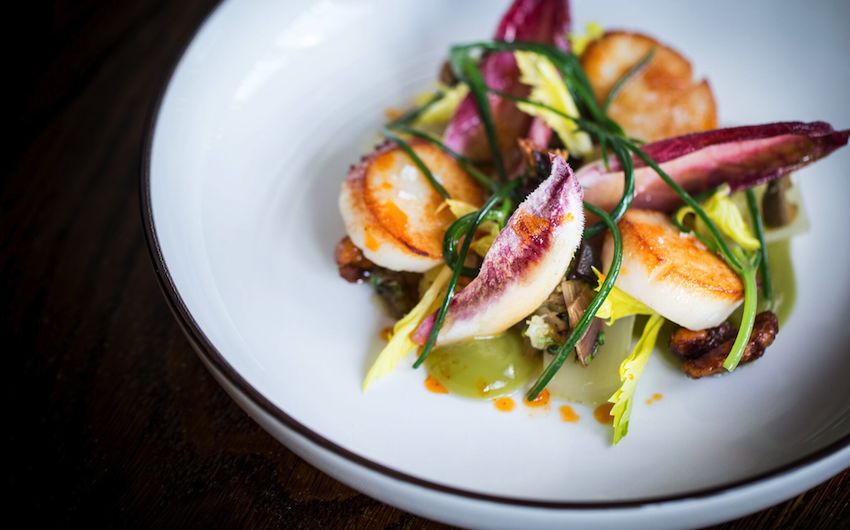 When it comes to Heston’s restaurants, The Fat Duck steals all the headlines but if you can’t get a reservation or can’t stump up the 250 for a ticket, there’s two much more accessible ways to get a bit of Heston magic.

Yes, Heston has two other places in Bray, just a stone’s throw from The Fat Duck: Michelin-starred restaurant The Hind’s Head and The Crown. The Hind’s Head is his original pub, having bought it in 2004, but earlier this year it got a big spruce up and, as we’d never been, we thought it high time we went to check it out.

The building is a classic old pub, with low ceilings, wooden beams, dark cosy corners, and fireplaces. Upstairs is where the biggest change has happened though – whereas before it was just an overfill space for the restaurant it’s now a fully-fledged bar in its own right, called The Royal Lounge and is the perfect spot for a pre-dinner cocktail.

The Hind’s Head feels ever so slightly more like a ‘restaurant’ than The Crown, and even offers a tasting menu alongside a la carte options. We actually went for the a la carte so that we could try more things but at £58 the tasting menu is great value. Whatever you do, you must start with the Scotch Egg, a perfect quail’s egg with a warm runny yolk encased in pork and breadcrumbs. So good, in fact, that you’ll want to get one each.

We went for two seafood starters, knowing that we were having meaty mains: a lapsang souchong tea-smoked salmon and, our favourite, a Scallop Waldorf with warm pickled celery, walnut dressing and dill oil. Next was duck breast, perfectly cooked, and served with pickled beetroot, pearl barley and turnips, and ‘Beef a la Mode’ served with rich braised ox cheek, black truffle and champ mash. You’ll definitely want to get a side of Heston’s famous triple cooked chips too – well, probably two portions!

Our top tips for dessert are the warm chocolate pudding and the cherry bakewell, one of our favourite classics and served here with a yoghurt ice cream. Service at The Hind’s Head, under the guidance of new GM Nick Broderick, was spot on too and certainly what you’d expect from a Michelin-starred place.