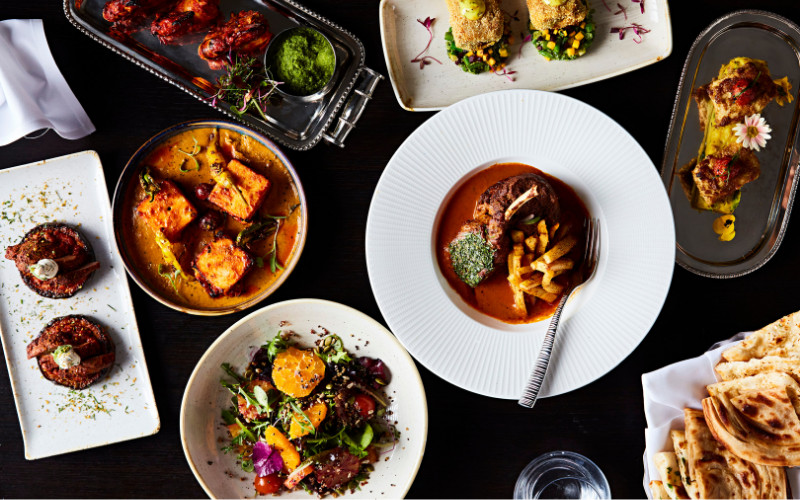 It’s not often that restaurants open down in Dulwich, at least not ones that catch our eye anyway, but the new-ish Heritage has done just that. Due to open pre-pandemic, Heritage finally launched their delivery service back in the depths of lockdown 2.0 and now it’s swung its doors wide open to bring fine-dining Indian food to South London.

The restaurant re-imagines traditional Indian cooking by putting a modern spin on established recipes, with a menu that manages to pay homage to India’s diverse culinary culture whilst also having a little fun too. The kitchen is headed up by Chef Dayashankar Sharma (ex-Tamarind, the first Indian restaurant in London to receive a Michelin star), who strikes the balance between crowd-pleasing classics and pure-genius plates, from the likes of Goan stuffed fish and lamb biryani to sundried tomato & truffle naan and plum, honey & mustard spiced duck.

If you’re not any good at deciphering your way through an a la carte menu, the tasting menu (available Tuesday through to Thursday) might be the way to go. We opted for the daily menu, where there was plenty to choose from including small plates, shared kebabs, large plates, side dishes and a lovely line-up of breads (but more on them later). We went heavy, not that we regretted it, so be warned that portions are generous and you will end up taking things home in takeaway boxes.

The Shatkora Jhinga is a must; your jaw will hit the floor when you see the size of these king prawns, seriously they’re whoppers. Marinated with lemongrass and shatkora, then grilled in a clay oven, they are a treat for your tastebuds as much as they are for your eyes. When it came to mains, we stuck to the veggie options because Heritage’s dishes are rich, in the good way that Indian food should be, but still. The Paneer Aur Mirch Ka Salan, hunks of paneer sitting snug in a thick, perfectly-spiced sauce, is another stunner just like the roasted baby aubergines with spiced kolhapuri masala.

Moving onto the breads and sides, arguably the best bit, we opted for the tadka dal which had a glorious smokey undertone and was just begging to be mopped up by the flakiest, butteriest paratha. We also loved the saffron spiked rice; okra with tomato & tangy onion; and cheese & chilli naan. Full up yet? Yeah we were too, so sadly there wasn’t much room for pud. But what we did have room for was Heritage’s cocktail list. The Rajwara Old Fashioned caught our eye (hello spiced rum, bourbon soaked cherries and bitters) but we thought we’d save that for next time, not that we needed another excuse, and sip on the after-dinner Espresso Martini instead.

Heritage lives up to the hype, not that there’s enough of it just yet, but take our word for it there will be soon. And as for the service, well that was worth the trip to West Dulwich alone.