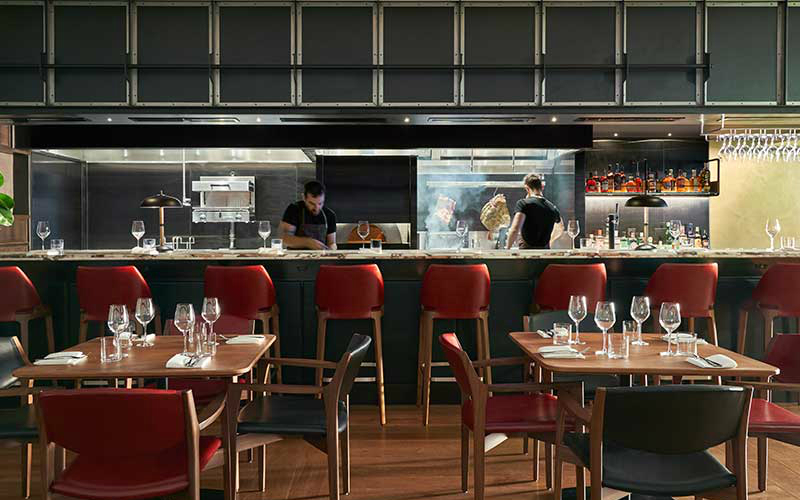 The Met Bar at the COMO Metropolitan Hotel in Mayfair is no more. After its 90s heyday as a celeb hangout it’s now been transformed in to Gridiron, a live-fire grill restaurant with an A-list team on board. How times change.

Hawksmoor’s Richard H. Turner and Colin McSherry (who’s worked at The Clove Club, The Ledbury, The Fat Duck and Murano) are in charge of the Gridiron menu with fire-cooking taking centre stage. The prime seats are at the bar in front of the open kitchen, giving you a front row viewpoint of the big cuts of meat being licked by the flames.

We kicked off with a classic combo: a glass of fizz and scampi. This scampi was pretty special, made from langoustine tails, with a wonderfully light crispy batter and a jalapeno tartare. For starters we can absolutely recommend the juicy wood-roasted scallops with bone marrow XO and smoked eel with braised beef shin croquette.

For the mains we had one fish dish, a fillet of John Dory given the grill treatment and served with an anchovy and mushroom sauce. The anchovy was perhaps slightly overpowering though so steer away unless you love those little fishies. It was hard not to go for one of the steaks too, and our Highland sirloin cut with a bone marrow gravy was every bit as good as Hawksmoor.

The two best dishes of the entire night were a side dish and a dessert. We went for the Tunworth mashed potato with braised trotter and crackling with the steak and in all honesty it was good we could have happily sat there with a giant bowl of it all night. At the end we had an incredible sticky toffee pudding. We’re not even sure why it was so good and what magic they’d conjured but it was definitely one of the best we’ve ever had.

Things are equally impressive over at the Gridiron bar. Max and Noel Venning have created the cocktail list, re-imagining classics like an Old Fashioned made with pandan and clear milk; a Bloody Mary with vodka, mustard, butter and stock; and a White Russian with vodka, coffee, miso and milk. Wine writer Fiona Beckett has overseen the bottle selection, choosing a range that spans new world wines to French classics, with sommelier Lucy Ward (formerly of Noble Rot and Dinner by Heston) curating an ‘Under the Counter’ list.

It’s clear that COMO and the team they bought on board have put a lot of work and care into Gridiron. And we’re happy to say it’s totally paid off.