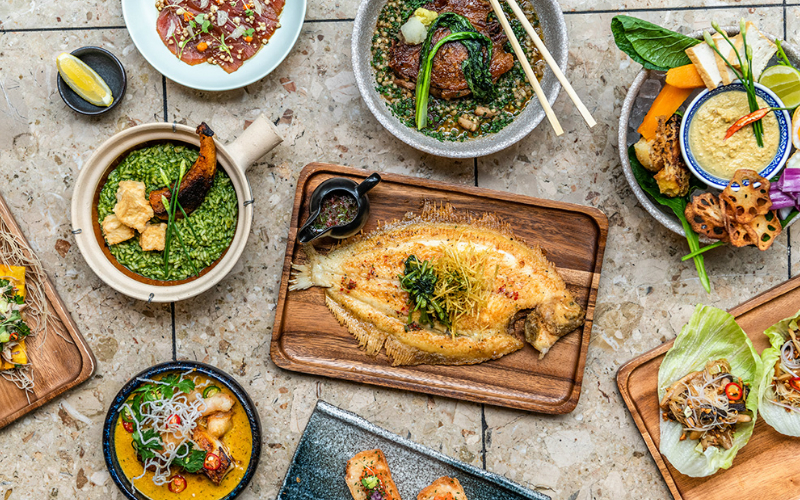 Freak Scene, the pan-Asian restaurant run by Australian chef Scott Hallsworth (ex-Kurobuta), opened back in March 2018 right in the heart of Soho, after popping up the year before in Farringdon, but we’ve only just got round to checking out the perm site. It feels like you’re walking into a lively bar, except it’s a small, intimate, counter seating restaurant where you can get friendly (if you choose to) with your neighbours while watching the action unfold in the kitchen. And it’s definitely the first time we’ve been welcomed into a restaurant, shown to our seat and asked if we wanted to kick things off with a wet pussy…turns out it’s a shot and a gentle one at that.

The menu, which features a lot of new dishes Scott and his team have been working on after a trip to Thailand earlier this year, is damn creative. Six to eight dishes between two was the brief and so we dived into red curry duck with fried buns, so moreish that you end up inhaling them; chicken-fried chicken with sticky peanut, soy and pickled cucumber; soft miso grilled aubergine with crunchy candied walnuts; chilli crab and avocado wonton ‘bombs’, which are like supercharged crisps; and roasted cabbage with dried miso, ponzu and truffle oil, which is about as magic an experience can get involving cabbage. We’re still dreaming about it now.

We ended the meal with a Sake Bomb – a shot of sake that sits on top of chopsticks that are resting upon a glass half filled with beer. The ritual goes like this: you chant ‘ichi, ni, san, sake, sake bomb’, bang your fists on the table causing the glass to shake, the chopsticks to move and the shot to drop into the beer, which you then grab, cheers and down. It’s surprisingly refreshing and easy to drink.

The new dishes at Freak Scene are great, the menu is super playful and inventive with great flavours and textures. Besides that, we just had fun, which took the experience from being a “yeah the food is great” to “you’ve got to go there, it’s so fun, get those wontons, the duck buns, that magic cabbage and definitely ask for a sake bomb.”

UBER BOAT IS COMING TO LONDON (25)