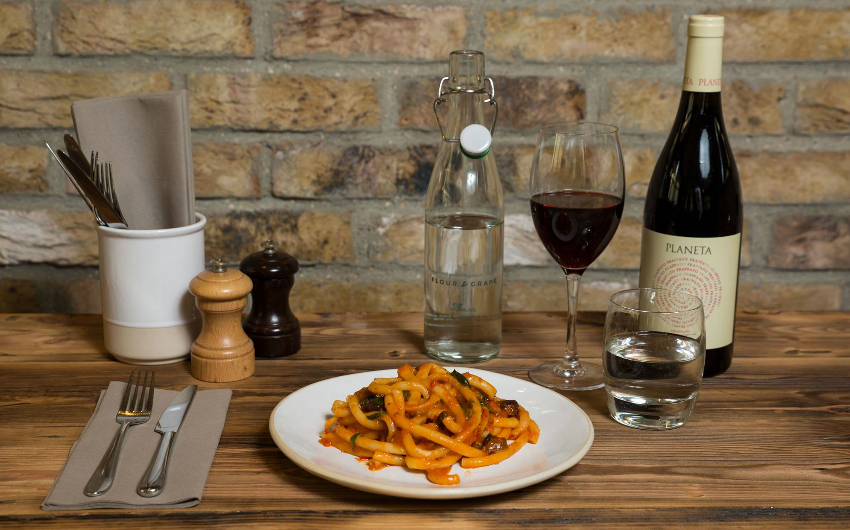 Pasta restaurants popped up all over London in 2017, influenced by the amazing success of Padella in London Bridge. But if you want your pasta fast-a then you’re gonna have to find an alternative to Padella and its infamous queues. Say hello then to Flour & Grape, located not too far from Padella on Bermondsey Street, which has taken the place of Antico, an Italian restaurant that was also well known for its pasta.

It’s actually owned by the same people that had Antico but the Flour & Grape menu is more in line with London’s current pasta obsession: there’s only eight pasta dishes on offer and a handful of starters and desserts. There are however some Antico dishes still on there, like the tortelloni packed with roast pork shoulder and sage butter, which they’ve been dishing up since 2012 and we can confirm it still kicks ass. There’s also a decent pappardelle with beef shin and a cacio e pepe bucatini – hey if it ain’t broke, don’t fix it.

So if you’re in London Bridge and fancy some pasta, then Flour & Grape is another great option – oh and they take bookings too…

214 Bermondsey St, London SE1 3TQ
flourandgrape.com
Flour & Grape is one of our top cheap eats in the city, see what else made the list here.

THE ST. JOHN BAKERY IS RE-OPENING (1)