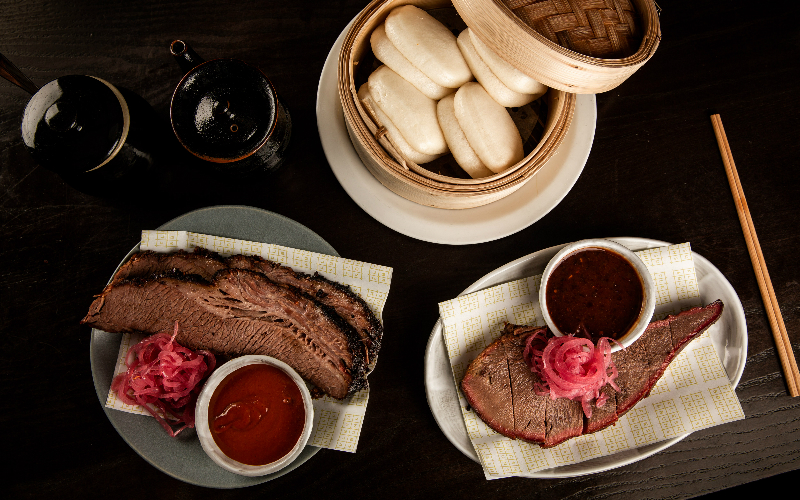 Flesh & Buns has been slinging out the baos in Covent Garden for almost five years and now the empire has expanded with a second site in Fitzrovia. The new restaurant has the same Japanese izakaya feel with a large bar, a spacious dining room and seating around the open kitchen, and it’s pretty swish thanks to lots of dark wood and mood lighting, with an entire wall of those gold waving good luck cats thrown in for a bit of fun.

The Fitzrovia Flesh & Buns has branched out menu-wise from the original with a Nikkei Peruvian twist, so you also have a selection of ceviches and tiraditos alongside the sushi and sashimi. The yellowtail tiradito, topped with pickled kumquat and sat in a zesty and spicy tiger’s milk, which was so good we were spooning the sauce out of the dish and the spicy tuna roll, also with a decent whack of heat to it, were our faves from the raw section of the menu.

From the namesake flesh and buns offering we went for the rabbit katsu, which was properly crisp on the outside yet not at all dry in the middle (often an issue with rabbit) and came with a sharp fennel and apple salad to cut through the richness. The kitchen at the Fitzrovia site is home to a new wood smoker, meaning more new dishes like the chilli miso brisket. Juicy slices of meat came with an amazing chipotle miso BBQ sauce and a massive pile of red chillies (not dissimilar to the brisket bun at Smokestak) and though it’s messy work trying to get it all into one of the soft baos, it’s so worth it.

The Peruvian influence extends to the cocktail list, with tables being equipped with Press for Pisco buttons. They’re not quite as glam as the buttons in Bob Bob Ricard but it’s still a lot of fun especially when the bartender wheels his trolley to your table and shakes up a round of pisco sours.

With the second Flesh & Buns, the team has managed to replicate the standards set by the original but add enough new elements to make it feel fresh. Plus we can’t resist a good drinks trolley.