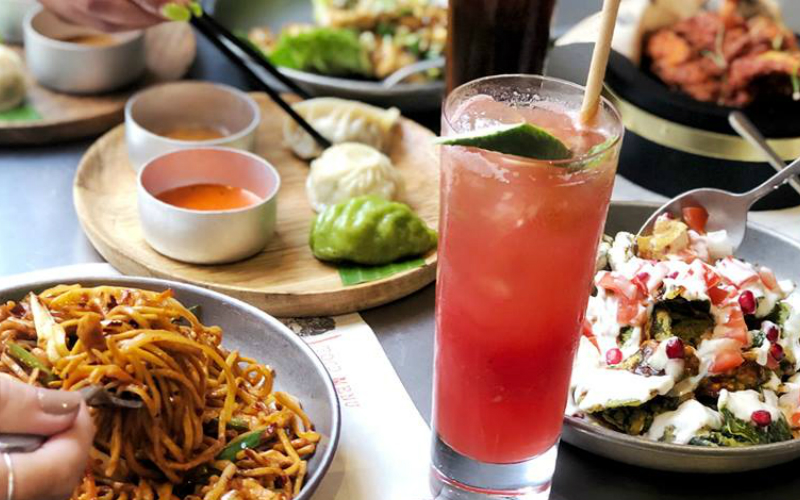 Fatt Punditt is a new Indo-Chinese restaurant bringing a taste of Tangra, Kolkata to London. The fusion of these cuisines originated in Kolkata, when the Hakka community migrated to India from the Canton province of China. They brought their cooking techniques and traditions, blending them with Indian spices and ingredients. The restaurant’s name is a nod to this heritage, with ‘Fatt’ being a common Chinese surname and ‘Pundit’ being the Indian word for scholar.

The decor of the Soho site is minimalist with grey stone walls decorated with Chinese writing. The rustic theme extends to the crockery too, with certain food being served in tin dishes, typical of the cuisine. The menu is designed for sharing, so we tried to hit up all the sections. We started with momos, steamed dumplings traditional in Tangra, which are stuffed with a choice of mixed vegetables, chicken, beef or kid goat and served with a spicy chutney for dipping.

We followed with Hakka chilli paneer lettuce cups and the crackling spinach, which comes smothered in a sweet yoghurt, date and plum sauce, from the veg section, and from the seafood dishes, the crunchy peppercorn crab and Bombay chilli prawns, both of which had a spicy kick from the Szechuan chillies. Meat-wise the ribeye dry red chilli beef was a highlight, tender and rich thanks to its sticky sauce. Add a side of pak choy and Bing bread for winning combo.

If you do manage to save room for dessert, the sizzling brownie is pretty epic; it comes to the table smoking hot in a metal dish, topped with melting vanilla ice cream. And if you’d rather something more traditional, the mango shrikhand, made with sweetened hung yogurt, saffron and honeycomb, is the one.

Indo-Chinese food isn’t as common in London as either individual cuisine is but if you like one (or both) Fatt Pundit is definitely one to try.