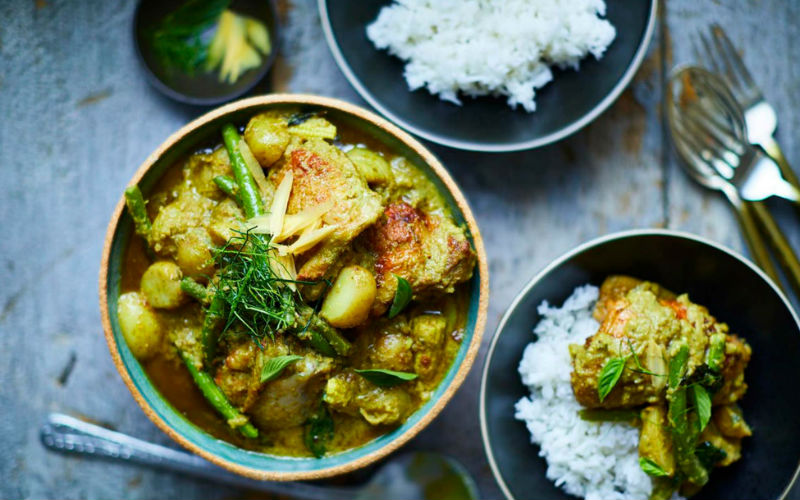 Sebby Holmes, the chef behind Farang in Highbury earned his stripes at some of the best Thai restaurants in London, including Begging Bowl and a stint as head chef a the original (now closed) Smoking Goat in Soho. He opened his own place in a semi-permanent form last year and we went by recently to check it out and to see how it compares with London’s new wave of Thai such as Som Saa and Krapow.

Farang is has taken over what was San Daniele without changing much inside, and it’s a little odd to be eating spicy Thai food in a setting that screams 90s rustic Italian but Londoners have become accustomed to such jarring settings at various pop-ups over the years. The menu is divided into small and large plates but there’s also an option to have a best of set menu, choosing either eight or ten courses.

We’re always fans of having the chef choose our dishes so we went for the 8 course menu (£35). The first four small plates came pretty much all at once to get us going: crispy duck wontons with plum dipping sauce; whiskey and honey cured salmon; crunchy fried chicken with chilli and fish sauce glaze; and ‘Miang’ – minced prawn in betel leaves.

Then came two BIG mains: braised beef cheeks with mustard greens, and curried egg noodles with chicken that just about finished us off. The mains came with a side of one of our favourite ever dishes, som tam, or green papaya salad. Just as in Thailand this is seriously spicy so be warned! We were glad to have a couple of beers and a breather after a few mouthfuls. For dessert there’s pandan and banana ice cream, plus black sticky rice with tamarind & palm sugar caramelised taro root.