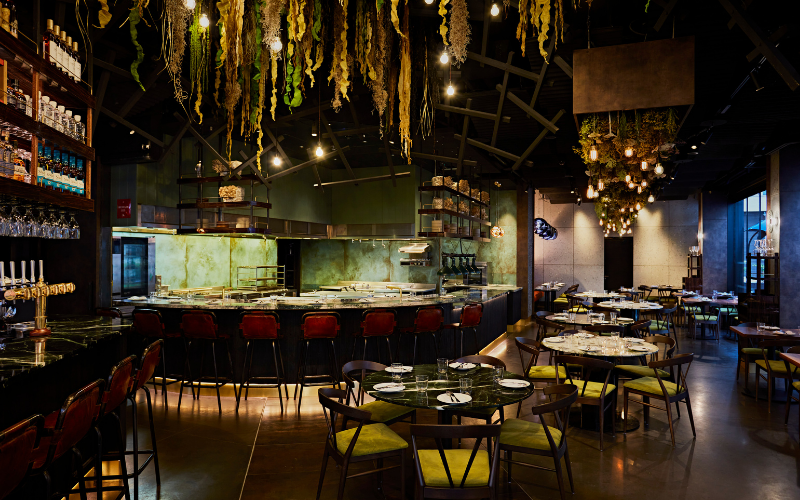 Fallow was the third pop-up to go in to the revolving space of 10 Heddon Street (the others being what became Manteca, and Pacific) and due to COVID, it had a slightly longer tenure than was expected. Now it’s moved to its very own permanent home just across the way at St James’s Market and things have been taken up another notch with a very sexy looking 65-cover dining room with a bar, wraparound terrace, and seven-seater chef’s counter overlooking the open kitchen.

Style-wise, chefs Will Murray and Jack Croft are continuing the same sustainable approach that won them so many plaudits at the residency. At first glance the menu appears a bit overwhelming – there are snacks, breads, raw bar, small plates, large plates, grill, steaks and sides sections – but the team are more than happy to talk through the dishes and offer recs.

We started with caramelised cauliflower croquetas sat on a black garlic puree and topped with crispy cauliflower leaves and English pecorino, and those two small perfect bites sent the tone for what turned out to be an incredible meal. They were followed by a parade of fantastic small plates of smoked pumpkin roasted in brown butter on a puree made from the pumpkin offcuts; fallow deer tartare with homemade crisps; and mushroom parfait made from shiitake mushrooms and topped with homegrown (literally, there’s a mushroom room in the basement and planters filled with them above the pass) oyster mushrooms, which had the most intense meaty flavour.

We then had one large plate of confit cabbage blanketed with crispy shredded cabbage that was so buttery we were able to eat it with a spoon, and one steak, the tenderest dairy cow fillet with crispy boulangere potatoes (reminiscent of the confit tatties at Quality Chop House) and mustard green beans – simple but perfectly executed.

Chef Anna Williams who was previously Head Pastry Chef at Dinner by Heston, has joined the team and she’s certainly made her mark with the desserts. The sourdough soft serve, made using surplus bread, tasted like bread (obvs) but also like the burnt sugar top you get on a creme brulee, and the Chelsea tart with caramelised whey had major dulce de leche vibes while still being light, so we had no problem polishing off the sizeable wedge.

It was a night of faultless cooking and given they were only a week into their new digs on our visit, it was even more impressive. Jack and Will have come a long way since we first ate their food at their Crispin pop-up and they’re only going to get better and better.