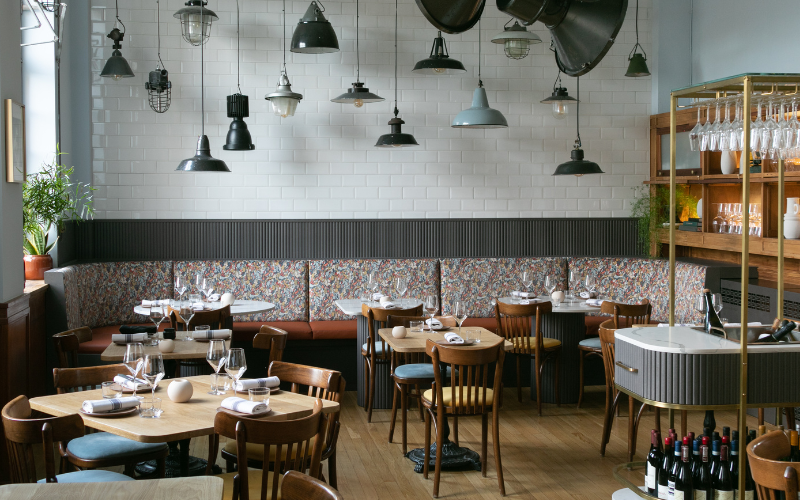 Rafael Cagali already runs the two-star Da Terra in the Town Hall Hotel in Bethnal Green (which is one of our fave restaurants in town) and he’s just opened a second spot there called Elis. Named as a tribute to his mother, whose first restaurant and jazz bar in São Paulo was named after Brazilian musician Elis Regina, Rafael’s Elis has taken over the spot where the Corner Room used to be. The intimate space is much the same as it was when it was Corner Room – those signature hanging lights at the far end of the room have been kept, which is a nice touch – but it’s been polished up with marble table tops, terrazzo effect fabric on the banquettes, and stylish cutlery and ceramics. Given the inspo behind the restaurant, the soundtrack is also on point.

Like Da Terra, Elis is influenced by Rafael’s Brazilian-Italian heritage but it’s more relaxed, so you go a la carte rather than for a blind-tasting option. The menu is split into small plates and larger dishes of pasta, fish and meat, and even between two people you can try a fair amount. Don’t miss the bread basket, which includes focaccia, seeded sourdough and moreish pao de queijo (Brazilian cheese bread) and comes with cultured butter, olive oil and stracciatella – no dry bread here – in individual little wooden pots. It’s elegant touches like that elevate the Elis experience, it is from a two-star chef after all.

Off the back of the cheese bread, we had high hopes for the pecorino churros but they were as light in cheese flavour as they were in texture, even with a generous sprinkle of pecorino on top. The moreish bacalhau fritters delivered though, livened further by a squeeze of lime and slicked through the dende mayo, the only thing that could have improved the dish would have been more of this. The arctic char crudo was the most beautiful looking of the small plates thanks to the vivid yellow tucupi dressing (made from the manioc root) and was a welcome counterpoint to the fried dishes with its clean, delicate flavour punctuated with acid from pieces of grapefruit.

We can never resist an aubergine parmigiana and Elis’ version is very good indeed. So many can be overly sloppy or watery but this was perfectly balanced – thin slices of aubergine fried until crispy, a deep tomato sauce, enough cheese to hold it all together. The short rib rigatoni was another well-executed classic, with excellent pasta bound with lots of rich shredded meat.

There was a touch of deja vu with the puddings; the dulce de leche doughnuts were feather light but only a whisper of caramel flavour. Contrastingly, the flavours of the pistachio affogato were turned up to eleven – a joltingly strong bitter espresso that could have done with something a touch sweeter than the fantastic pistachio ice cream it was poured over. Definitely a pud for grown ups.

Elis does strike a good balance between well-executed classics and showcasing some less well-known Brazilian ingredients, and it boasts a very well-curated drinks list – we can recommend the elderflower lemonade with cachaca and whisky – so Rafael has the makings of another hit on his hands.