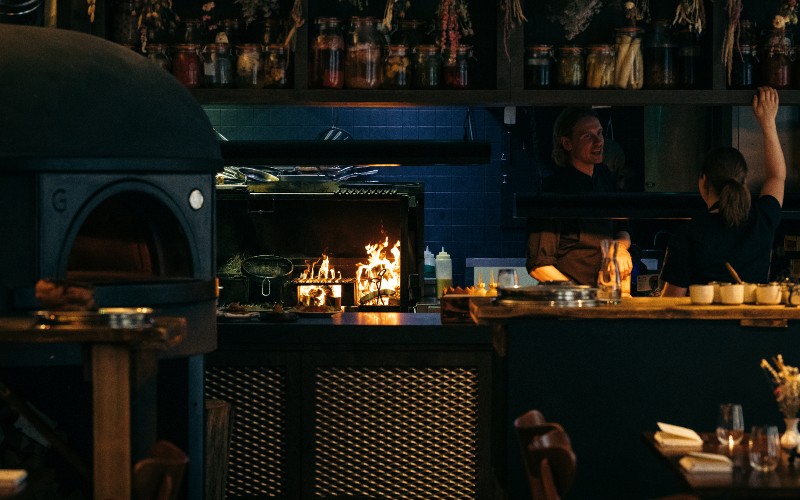 If autumn was a restaurant, it would probably be Ekstedt at the Yard, Michelin-starred Niklas Ekstedt’s first outpost outside of Sweden, inside the five-star Great Scotland Yard Hotel. The restaurant is filled with dark wood, dried flowers, jars of pickles and ferments lining the shelves above the kitchen, and a huge wood oven and open flames in the kitchen keeping the place nice and toasty. They drew people in like the proverbial moth; we’ve never seen so many people go up to a kitchen for a look mid-service and we’ve never seen such a gracious team, waving people in behind the pass and explaining how the kitchen works.

Previously tasting menu only, Ekstedt at the Yard has now introduced an a la carte option, though the focus on Scandinavian techniques and open-fire cooking remains. You get a hunk of superb sourdough, made with starter from the Stockholm restaurant, and homemade butter that you mix with whey and pine oil to kick things off but we highly recommend getting the ‘snacks from the fire’ before diving into the three courses.

It’s a beautifully presented selection of morsels including chunks of soft ember baked leek topped with smoked blood pudding and reindeer moss, hay smoked custard with salty pops of trout roe, and a tiny cast-iron doughnut filled with lovage and smoked egg yolk, which is the type of thing you could eat far more than would be respectable.

What followed was a masterclass in how to cook over open fire. The hay-smoked Orkney scallop had great charring to it but was neither overcooked nor overpowered by the smoke, with kohlrabi adding crunch and fermented vegetable juice vinaigrette providing just the right amount of acidity. You could feel the touch of the fire in the birch-flamed chanterelles, with extra earthiness coming from black truffle and pops of sweetness from kernels of charred sweetcorn. We added on the flambadou lobster, which is basted with flaming beef fat from a medieval-looking iron cone contraption, and it really showcases the skills of the chef as the lobster takes on a richness from the fat without its delicate flavour being overpowered.

There was more excellent fish cookery with the juniper smoked John Dory with soft, flaky fish sat under a cloud of juniper foam, accompanied by buttery hispi cabbage, crunchy beansprouts and more bite and funk from fermented celeriac. Our other main, slow charcoal roasted pork neck, had lovely tender meat, sharp fermented gooseberries and a trotter sauce that managed to have a gelatinous quality without being overly fatty.

If the flames in the kitchen are a bit too far away for your liking, you can have some of the fire come tableside with the baked alaska, with elderflower ice cream and lingonberries, which, once pulled from the wood-fired oven, is flambeed at with aquavit right in front of you. The pumpkin custard pudding may not have had the same fireworks in terms of presentation – although the mini pumpkin the custard was served in was pretty cute – but with an almost savoury custard topped with a zingy sea buckthorn sorbet and a sugared cardamom doughnut on the side, it ticked all the boxes in terms of taste.

The total mastery of open-fire cooking, of infusing smoke into ingredients without destroying them with the flames, combined with Scandinavian flavours, makes a meal at Ekstedt at the Yard a properly memorable experience.