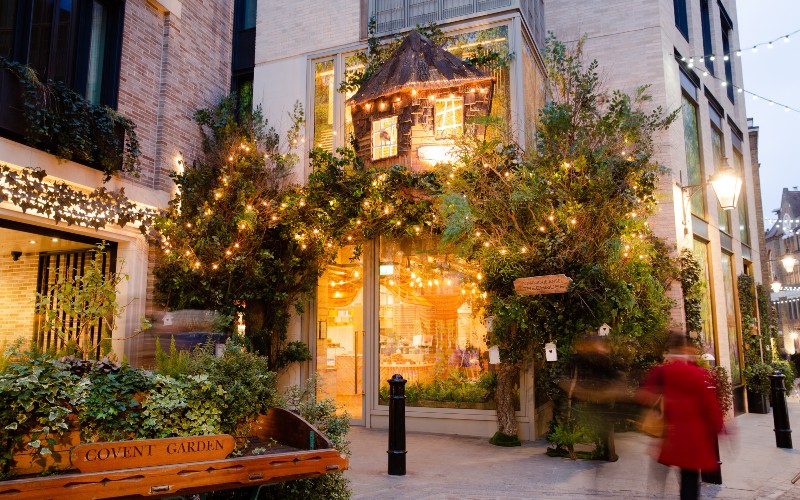 He’s caused mad queues in New York and his Belgravia bakery is always busy thanks to crazy popular dishes like the banana paella, the chocolate chip cookie shot and of course, the iconic Cronut. Now Dominique Ansel has expanded his empire with a second London location in Covent Garden.

Treehouse is a separate entity from the Belgravia site rather than just a carbon copy, and it’s so much more than a bakery (although there is a bakery boutique on the ground floor). Upstairs is the bistro and they’ve really gone for the treehouse decor – the canopy and the lights actually look nice once you’re sat up there but the faux forest wallpaper is a bit too on the nose for us.

The menu is a celebration of savoury dough with bread, pastas, and all manner of pies and quiches on there. Basically prepare for a carb fest. Pasta-wise, we went for the pumpkin & spinach agnolotti in a walnut butter sauce and the pillowy gnocchi with comte sauce and buried under a mountain of parmesan. It’s cheesy heaven and the gnocchi really is so pillowy.

Moving on to the pastry, we opted for the comte & leek quiche, which was soft set and light as a feather, and it’s polar opposite, the venison, celeriac and cabbage pithivier, complete with the stickiest, richest juniper jus. It’s a beast of pie. As much as the menu is focused on the savoury, it’s a Dominique Ansel joint so the desserts are on point too. Not only are they made for sharing, they’re made for the ‘gram – the sticky toffee pudding comes with a custard and toffee sauce that ripples as it gets poured over the top.

The food at Treehouse tastes great but there’s no denying that it’s a heavy menu – we had to skip the bread basket even though it sounded fantastic, the only green thing we had during the meal was a handful of frisee salad with the quiche and all the puddings are massive. Either bring in reinforcements to help you get through it or pop in for one dish and a pud.