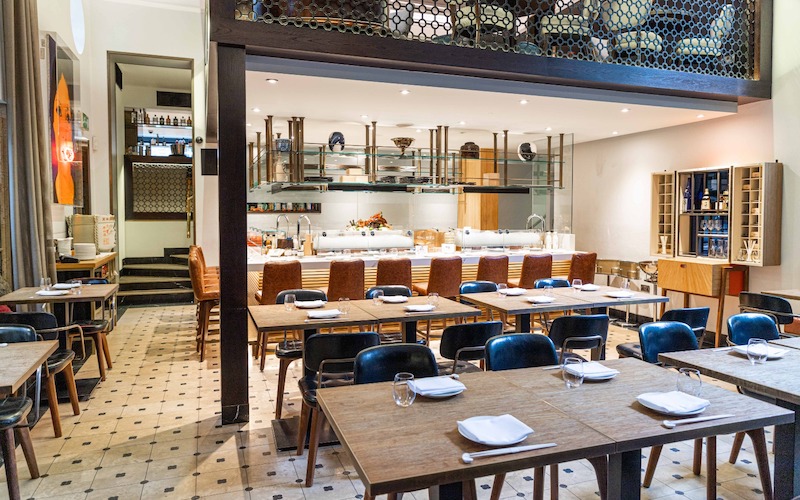 The original Dinings in Marylebone was long regarded as one of London’s best high-end sushi restaurants before its sibling Dinings SW3 opened up in Chelsea in 2017. Unlike the tiny original the Chelsea site is much bigger, set in a Grade-I listed mews building with the dining room split over two levels, encompassing a bar/lounge area, a sushi kitchen counter (currently in use but screened off from the chefs with plastic shields) and the main restaurant space. It’s all very west London right down to the well-heeled crowd that pack out the place for midweek lunches.

Executive Chef Masaki Sugisaki has made his name across both restaurants blending Japanese cuisine with Western influences – not exactly ‘fusion’ but definitely not strictly traditional either. One of the signature dishes, for instance, is a mini wagyu burger cooked on the Josper grill and served with teriyaki sauce and spicy sesame aioli.

There’s some modern flourishes to many of the early dishes – crispy rice with salmon and wasabi aioli arrives in a plume of dry ice, and a special of ‘bolognese’ replaces noodles with thin strips of cuttlefish. That might sound a bit bizarre but it was actually delicious.

For us though, it’s the sushi that’s always the highlight of a meal like this. Usually you’d have this first, but at Dinings they serve a selection at the end of the meal instead (well, still before dessert obvs). Most of their fish is delivered daily from Cornwall, having just been caught a few hours earlier so it is guaranteed to be super fresh. We loved the fatty tuna with a dollop of British wasabi; the line-caught sea bass; and the smoked eel (from Smith’s smokery) with yuzu.

There’s an excellent list of sakes too, including a couple made especially for the restaurant brewed by Konotomo in Japan. None of it comes cheap of course, but these places rarely do, and after the year we’ve all had, it shouldn’t be hard to think of a reason to treat yourself.