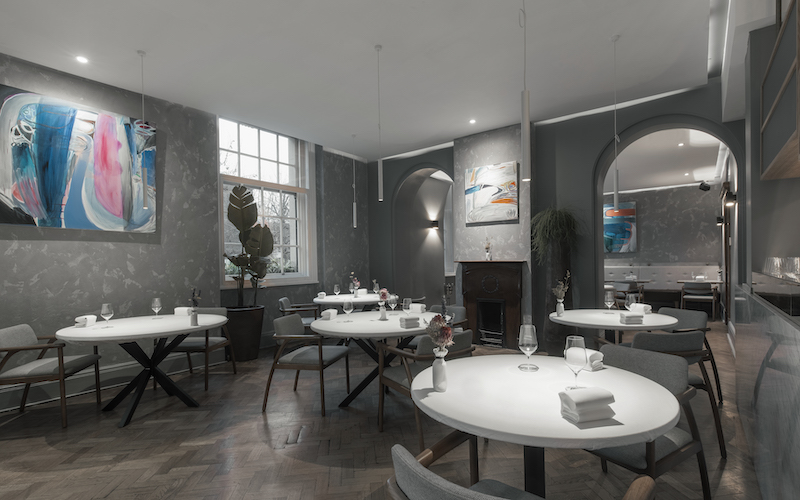 Bethnal Green’s Town Hall Hotel has already been home to two fantastic restaurants since it opened – Nuno Mendes’ Viajante and Lee Westcott’s Typing Room. Next in line is Da Terra, which opened fairly quietly back in January, and is run by chefs Paulo Airaudo (who has the Michelin-starred Amelia in San Sebastian) and Rafael Cagali (formerly of Fera and Aulis).

We were big fans of both Viajante and Typing Room so we’ve been excited to check Da Terra out, which we finally got around to on a recent Saturday night. If you went to either of the previous two restaurants, you’ll see that not a whole lot has changed in the set up and interiors – the open kitchen is still there and the dining room is roughly split in two by a small dividing wall. There’s some new artwork and furniture but it still has that smart, relaxed feel that was there before.

Da Terra offers blind tasting menus, so the only choice you have to make is if you want the short (£73) or long version (£90). The food takes a mix of influences, from Rafael’s Brazilian background to his experience working for Simon Rogan, plus Spanish and Italian touch points too. What joins it all together is that it’s all absolutely knock-out brilliant, with each dish beautifully presented and perfectly cooked.

We went for the long menu which was 11 courses and, for us, it was one of the best meals we’ve had in London for a while. There are too many highlights to mention but particular standouts were some of the early courses such as the Isle of Mull scallop, which had been very thinly sliced and served with apple and fennel sauce; the amazing ‘panzanella’ of sweet tomatoes and stracciatella cheese topped with a tomato consomme; and bone marrow and parsley with sourdough.

We also loved the chicken liver mousse served with fresh onion brioche and the odd playful touch, like the butter shaped like Lego blocks and the toy shark and diver served with the scallop dish. Later on there was an amazing pimped up version of a Brazilian classic feijoada but rather than being a stew, it was a perfect square of pork belly on top of black beans and farofa.

The food at Da Terra is technical and accomplished but the restaurant never loses sight of delivering fantastic dishes that you actually want to eat. The playful touches and amazing service from Rafael, who serves many of the dishes himself, ensures that an evening here is fun as well as showcasing a very talented bunch of chefs in the kitchen.

Da Terra had some pretty big shoes to fill, but we think this is the best restaurant at the Town Hall Hotel yet.